Archaeological findings show that people have lived in Lesotho for over 50,000 years. The first inhabitants were hunters and sanctuaries of the San people, who inhabited much of southern Africa. 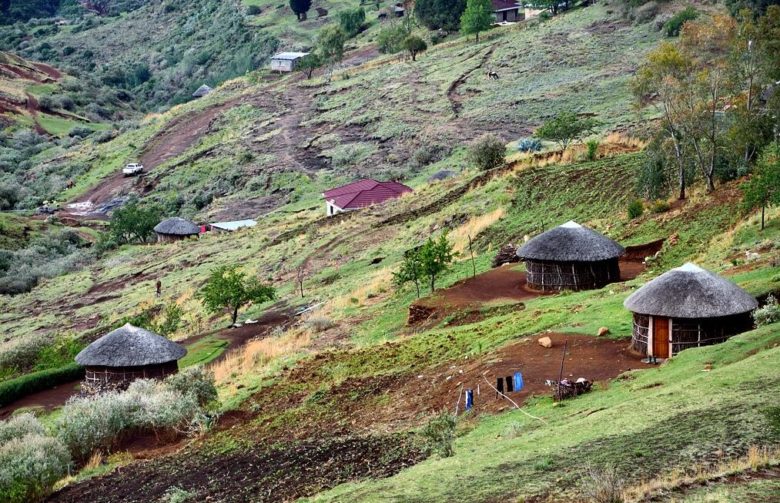 From what is today South Africa, several Bantu peoples immigrated to Lesotho from approx. 1400; first small groups from the nguni people, then the mapolans, maphetla and baphuthi and soot-speaking people (basotho), who now make up the bulk of the country’s population. Lesotho did not yet exist as a state formation; The nation-building of the Basotho people is usually timed to the first half of the 19th century, and is related to King Moshoeshoe (1786-1870), who then emerged as local chief and eventually unified leader of the Basotho.

Among other things, Moshoeshoe made his mark in the defense against warriors and robbers who haunted the Basotho territories around 1820, and gathered various clans and chief judges in an alliance that laid the foundation for a united Basotho nation – which later became the kingdom of Lesotho. Still, the Basotho controlled significant lands in the lowlands, in what later became the Orange Free State in South Africa, as well as mountain areas in today’s Lesotho.

Several events that took place in present-day South Africa in the first half of the 19th century were decisive for the emergence of modern Lesotho. Unrest among African people, including the Ngunis, as well as wars as a result of Zulu king Shaka’s expansionism, led to new peoples displacement and conflict with the Basotho. At the same time, in the mid-1830s, white settlers (settlers) crossed the Orange River and settled within parts of Moshoeshoe’s kingdom.

In addition to the threatening political development, the Basotho were haunted by drought and hunger. The colonization of the Boers threatened the land and independence of the Basotho, and King Moshoeshoe retreated to the mountains to better defend himself against militarily superior peasants. At the same time, he sought a political solution by allying himself with the British – which was in opposition to the Boers of later South Africa. In 1843, the king signed an agreement with the governor of the Cape Colony, in which Moshoeshoe was recognized as an ally.

With the British annexation of the Orange Free State in 1848, new boundaries – unacceptable to the Basotho – were drawn, and the Basotho led armed resistance to white colonization and British rule in 1851–52. The British withdrew from the Orange Free State in 1854, which then became a peasant republic. After a brief period of good relations, fighting began in 1858, followed by a tense period of new and partly extensive wars in 1865 and 1867, after which King Moshoeshoe sought British protection. In doing so, Lesotho was annexed by the United Kingdom and made a protectorate under the name Basutoland in 1868.

The British feared partly that the land of the Basotho would be completely taken over by the Boers, and partly that the Basotho would compensate for lost territory by submitting to other lands in the Cape Colony and Natal. Final boundaries were drawn in 1869. For economic reasons, the United Kingdom administratively merged Basutoland with the Cape Colony. When it gained internal self-government in 1872, a revolt broke out in Lesotho, and the direct government from London was resumed in 1884. In doing so, Basutoland was regarded as a separate state formation, which helped the country avoid being incorporated into the South African Union when it became established in 1910. Boerneworked for this, but the agreement with the British prevented such a development. The British ruled through an envoy, but at the same time established a degree of self-government through a national council, established in 1903, and a chief.

In the first half of the 20th century, demands were made for increased influence over the administration of Basutoland, and a nationalist movement demanding independence emerged. From 1952 this requirement was channeled through the country’s first party, the Basutoland Congress Party (BCP), founded by Ntsu Mokhehle. Another, the Marerna Tiou Party (MTP), was formed by a group of chieftains in 1957. A split of the BCP in 1958 led to the establishment of the Basutoland National Party (GDP), led by Leabua Jonathan.

BCP won the first election in 1960 and was instrumental in enacting a constitution in 1964. The party laid the foundation for Lesotho’s independence on October 4, 1966. By contrast, the 1965 election was won by GDP, with financial assistance from South Africa. Head of state at independence became King Moshoeshoe 2, grandson of the nation’s founder. As prime minister, Leabua Jonathan became the strong man in Lesotho and gained the influence that the king should not have executive power or play any political role.

When it became clear in the 1970 elections that GDP suffered defeat, Jonathan introduced a state of emergency, abolished the Constitution, disbanded the government and arrested opposition leaders. The king was forced into exile, but returned the same year. Several attempts at armed rebellion against Jonathan’s government were turned down; among other things, they were deployed by the Lesotho Liberation Army (LLA), an armed branch of the BCP that the prime minister accused South Africa of standing behind.

Following a South African blockade of the border from 1 January 1986, Lesotho’s semi-military, led by Major General Justine Lekhanya, carried out a coup that deposed Prime Minister Jonathan. King Moshoeshoe was reinstated as Lesotho’s real head of state, but power lay in a military council that Lekhanya deployed. Lesotho was then, until 1993, effectively governed by a military regime. The king resurfaced in exile in 1990, after discord with the military leaders. He was thus deposed and replaced by his son, who took the name Letsie 3.

In 1991, Lekhanya was appointed leader of the military council following a coup led by Colonel Phitsoane Ramaema, who himself was a member of the council. King Moshoeshoe returned to Lesotho in 1992, and was reinstated in 1995; Letsie abdicated and became crown prince.

Multi-party elections at a new national assembly were held in 1993. BCP won all the seats, and Mokhehle was appointed prime minister. Parts of the LLA were integrated into the national army. Various fractions of these were involved in internal clashes in 1994, and mediation from neighboring countries’ leaders was called for. In January 1996, King Moshoeshoe perished in a car accident and Letsie took over the throne again. That same year, a coup attempt staged by elements within the army failed. The political turmoil continued in 1997 when parts of the police rebelled and tried to oust the government.

In 1997, Mokhehle formed a new party, the Lesotho Congress for Democracy (LCD), and brought with it a majority of BCP MPs. In 1998, Lesotho endured the country’s most serious political crisis ever: The outcome of the May elections was disputed by the opposition after LCD, with 60.7 percent of the vote, took 78 of the 80 seats in the national assembly. During demonstrations in the capital Maseru, armed clashes occurred between supporters of the LCD and the opposition. Then, younger officers in the army rebelled and deposed their superiors.

Prime Minister Pakalitha Mosisili asked the regional cooperation organization SADC for assistance. South African and Botswana soldiers entered Lesotho on September 22, 1998, taking control of the most central political, economic and military installations. The intervention force was withdrawn in May 1999, after which a process of restoring normality and reintroducing democratic governance was begun – with new elections in 2002, won by LCD. Lesotho held early parliamentary elections in 2007, following a split in the LCD 2006 ruling party, when 18 MPs stepped out of the LCD and joined the new party All Basotho Convention (ABC), formed by Tom Thabane.

The National Assembly consists of 120 members, 80 of whom are directly elected, 40 distributed proportionally after voter approval. LCD barely managed to retain its majority in 2007, and continued in government after ten years in power. LCD got 62 representatives; National Independence Party (NIP) 21. In the same year, five men were indicted for high treason, accused of participating in an attack on an opposition leader and members of government. In 2009, an assassination attempt was made against Prime Minister and LCD leader Bethuel Pakalitha Mosisili.

Tom Thabane took over the prime minister post in 2012, after five years as opposition leader. However, the period following Thabane’s inauguration has been marked by turmoil, especially since his former bodyguard was charged with the attempted assault against Mosisili. Thabane fled to South Africa in August 2014, claiming that the military was trying to seize power and wanted to kill him. He returned to Lesotho in September 2014 with the protection of South African police.

In addition to political turmoil, Lesotho is characterized by occasional severe drought. The country is also badly affected by an AIDS epidemic; About 1/4 of the country’s adult population is believed to be HIV-infected.

Lesotho is a member of the SADC and the African Union, and actively participates in regional cooperation.