Mexico is a state in North America. The capital of the country is Mexico City. Approx. 128 million Mexicans and people of other nationalities live in Mexico. The official language is Spanish. Mexico covers an area of ​​around 2 million km² and is about six times the size of Poland. The highest mountain in Mexico is the Citlaltépetl with 5,700 meters. Neighboring countries are the United States of America, Guatemala and Belize.

The local influence of the cartels is large and is maintained through bribes to politicians, judges, prosecutors and police. The often huge profits are invested in the local business community in order to attract more stakeholders in addition to the cartel members. A large proportion of Mexico’s population lives in poverty, which can be seen as an explanation for the fact that cartels in the absence of other alternatives and prospects can recruit to such an extent.

Violence is not as widespread throughout the country but concentrated on areas where the cartels compete for control. Northern Mexico and, above all, the states of Sinaloa, Chihuahua, Coahuila, Tamaulipas, Durango and Nuevo León have been the worst affected, but the violence has also blossomed temporarily in other regions. The widespread violence caused by internal power struggles between cartels is one reason why people flee to mainly the United States to seek protection.

Since 2006, at least 100,000 people have been killed in the “war on drugs” initiated by Felipe Calderón. The vast majority of cartel members have been killed by police and military or killed in internal battles between rival gangs. Violence also affects other sectors of society such as the media, the judiciary and civil rights organizations which are perceived as a threat by the cartels.

The examination and transparency of the drug cartel’s activities is very limited. The country is considered one of the world’s most dangerous for journalists (2017). Since the beginning of the 2000’s, hundreds of reporters and photographers have been murdered or reported missing. In most cases, drug cartels are considered guilty, but very few murders have been cleared up. Even bloggers who have watched the drug war have been threatened or murdered.

The widespread drug trade is not a new phenomenon. Mexico has been a major drug producer and exporter since the 1960’s, especially to the United States. The primary commodity of the time was marijuana, but when the United States in principle became self-sufficient in marijuana in the 1990’s, the country’s import needs were reduced. Instead, cocaine became the drug form that came to dominate the US trade, which initially occurred with cocaine from Colombia. Imports to the United States were mainly by sea over the Caribbean Sea but eventually came to land via Mexico. The Colombian traders were eventually maneuvered out by Mexicans who took over the routes and even parts of the distribution route to the United States.

From being a trade characterized by smaller networks, so-called cartels, two larger groups came to dominate the commerce of the 21st century.

Sinaloa cartel leader Joaquín “El Chapo” Guzmán, arrested in early 2016 and extradited to the United States a year later. This has led to a weakening of the cartel due to internal struggles over who will take over the cartel while other cartels, including a new grouping called Jalisco new generation, have taken land from the Sinaloa cartel. The Zeta cartel has also weakened and received competition from other groups in eastern Mexico.

Smaller factions and new cartels appear all the time, often after internal power struggles in the larger cartels since former leaders are arrested or killed. It is in connection with new groups challenging the old or in internal power struggles that the violence increases dramatically in a short time. Once a group has established itself and taken control of a certain region, the level of violence usually goes down. 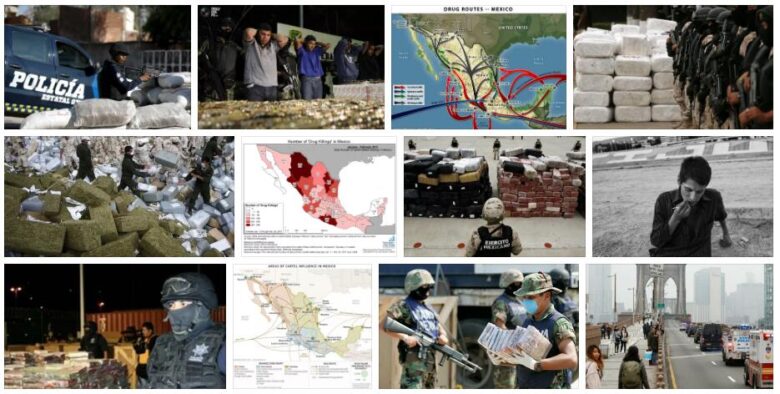