The population is predominantly Bantu people. The largest group of people is shona. The second largest is ndebele, who are descendants of Zulus from South Africa. Agriculture employs the majority of the population, but mining is substantial and the industry and service industry are relatively well developed. Tobacco is the most important export commodity. During the first decade after 2000, diamonds from the Marange field east of the country have become an important source of exports.

The area that is today Zimbabwe had been inhabited by bantams for hundreds of years when white settlers began to arrive in the latter half of the 19th century. In 1923, the country became a British colony named Southern Rhodesia. In 1965, the white minority government in Rhodesia declared the country to be independent, but the secession from Britain was not internationally recognized.

After a war of liberation, the country became an independent nation in 1980, taking the name Zimbabwe, after the great city ​​of Great Zimbabwe, the capital of the historic Kingdom of Zimbabwe.

Zimbabwe’s national anthem is from 1994 and is available with lyrics on shona (Ngaikomborerwe Nyika yeZimbabwe), ndebele (Kalibusisiwe Ilizwe leZimbabwe) and English (Blessed be the Land of Zimbabwe). 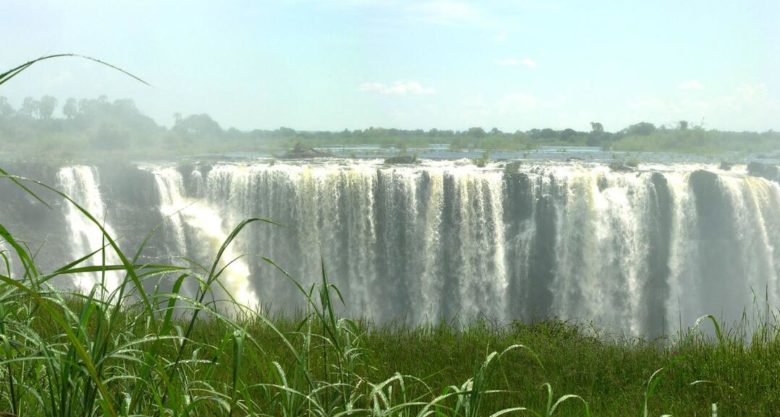 Zimbabwe has 13 million inhabitants (2013). In addition, millions of Zimbabweans have emigrated to other countries. There are no sure numbers, but estimates of the number of Zimbabweans living in exile in South Africa range from one to five million. 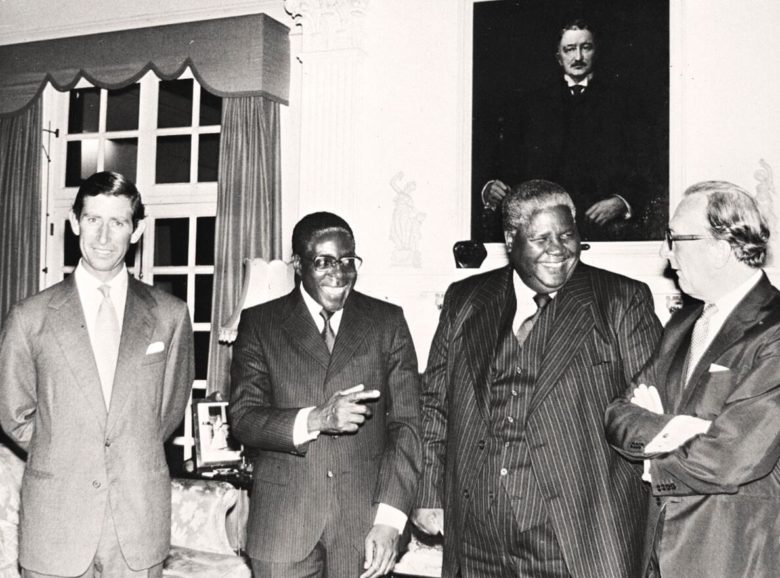 In April 1980, the former British colony of Southern Rhodesia became the independent state of Zimbabwe. During the Salisbury ceremony (which changed its name to Harare) (from left) met: Charles, Prince of Wales, Prime Minister Robert Mugabe, Party leader Joshua Nkomo and British Foreign Minister Lord Carrington. They stand under the painting of Cecil Rhodes, who gave his name to the colony.

On November 24, 2017, former Vice President Emmerson Mnangagwa was inaugurated as the country’s president after the military, and large sections of the ruling party, turned Mugabe’s back and carried out a coup nine days earlier.

The Constitution passed by a referendum in 2013 abolished the prime minister’s post and reintroduced the president as head of government. It restricts presidents to only being able to sit for two five-year presidential terms. The new constitution also strengthened women’s rights, limited the use of the death penalty and guaranteed freedom of expression. In addition, it gives Parliament more power, by removing the president’s veto power. The Constitution also prohibits gay practice. 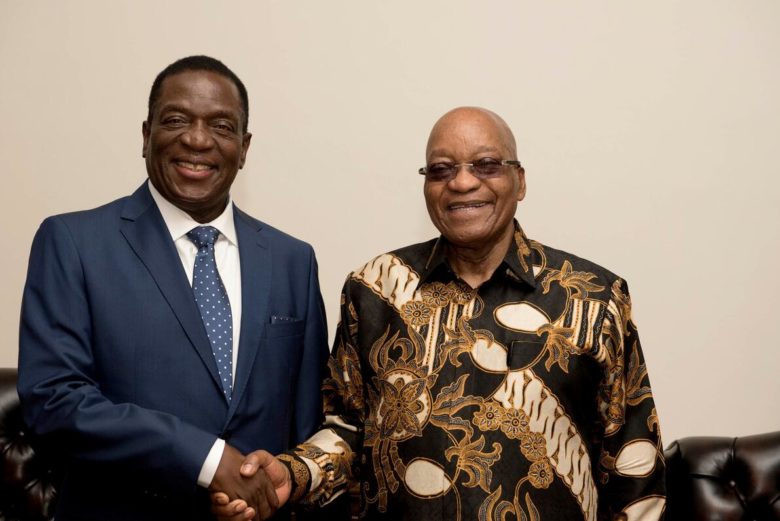 Emmerson Mnangagwa met South Africa’s President Jacob Zuma in Pretoria on November 22, 2017, after President Mugabe was placed under house arrest by the military. Two days later, Mnangagwa was sworn in as Zimbabwe’s president.

Zimbabwe has long been one of the richest countries in southern Africa, with a well-developed industry and services sector. Agriculture has been the driving force in the economy, with tobacco as an important export commodity. Zimbabwe also has a lucrative mining sector. Gold, platinum and diamonds are mined.

The political unrest that began in the late 1990s brought Zimbabwe into economic collapse. Zimbabwe’s participation in the war in the Democratic Republic of Congo from 1998 to 2002 was also a major financial burden for the country. Partly because of the government spending money to fund the war in Congo, Zimbabwe experienced a hyperinflation from 2005, which peaked in November 2008 with over fifty thousand trillion percent. In 2009, the authorities stated to hold the local currency. Various foreign currencies are used instead, such as the US Dollar, the Botswana Pula and the South African Rand.

Zimbabwe has long been a popular resort, known for its beautiful scenery, rich wildlife and historical monuments. One of the country’s most popular sights is the Victoria Falls, which, measured in area, is the largest area of ​​falling water in the world. Since the political violence increased from 2000, the number of tourists visiting the country has dropped significantly.

Since 2008, the economy has started to recover, with economic growth reaching nine percent annually in the period 2010-11. Zimbabwe continues to face significant financial challenges. Low participation in the formal economy provides low tax revenue and the country is among the world’s most corrupt. The organization Transparency International ranked Zimbabwe as 163 of 176 countries on its corruption index in 2012. 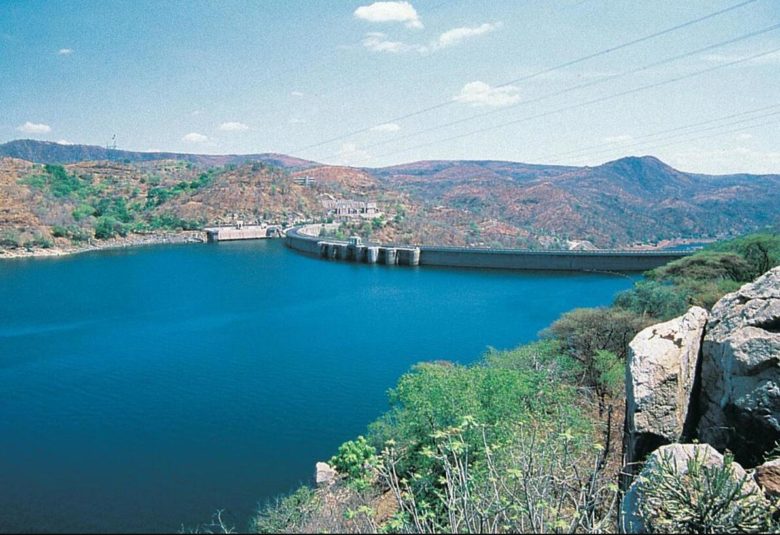 Most of the country’s electrical power comes from the Caribbean Sea installations on the Zimbabwe-Zambia border.

Zimbabwe was long known for having a well-developed school system. According to the United Nations Development Program, 92 percent of the adult population could read and write in 2010, which was the highest in Africa. The political unrest has led to 20,000 teachers leaving the country since 2007.

Zimbabwe has two English-language daily newspapers, The Herald and The Chronicle. The state-run broadcasting company Zimbabwe Broadcasting Corporation operates two nationwide TV channels and four radio stations. The media is strictly regulated by a restrictive press law. Independent and opposition journalists have in many cases been arrested and harassed.

The oldest art found in Zimbabwe is cave paintings by the San people. Today’s art is colorful and expressive, and often politically inspired. Zimbabwe is also known for its beautiful stone sculptures, inspired by the spirit world of the Shona.

Several of Africa’s most renowned English-language writers are from Zimbabwe, such as Dambudzo Marechera, Chenjerai Hove and Yvonne Vera. A considerable number of novels on shona have also been published. The Zimbabwe International Book Fair is held annually in Harare.

Music plays an important role in Zimbabwe’s daily life. Shona culture is known for its multi-voiced singing tradition. Traditional music played on mbira (thumb piano ) is also widespread. In recent decades, an urban popular music has emerged which is largely a mixture of traditional shona music and elements of reggae and soul. Zimbabwe Legit was the first African hip hop group to release the record in the United States. The twelve-inch Doin ‘Damage in My Native Language was released in 1992 and has become a valuable collector’s item.