According to UN estimates, just over 13 million people live in South Sudan. They are divided into some 60 larger groups of people, of which the nilotic dinkas, nuer and shilluk are the largest. Ethnic and religious contradictions were a driving force in the wars between the North and the South before the country’s division in 2011 as well as in the South Sudanese civil war in 2013–2015. 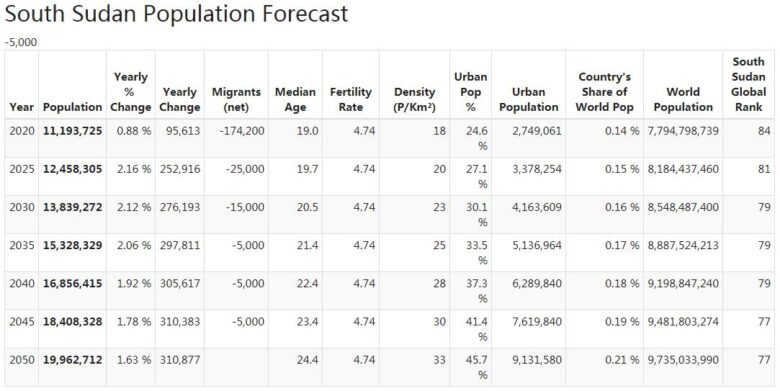 A majority of the population is made up of traditionally livestock nilotic people, of which Dinka is the largest group. Like the closely related Nuer people, Dinka breeds livestock and grows millet around Suddträsken. Dinka has not had any central government but has formed self-governing small groups, which, however, have been able to come together for external threats. There is an old rivalry between Dinka and Nuer, which is about the access to water and land for the herds. This rivalry contributed to the internal conflict that triggered the civil war in 2013–2015.

A third Nilotic people in the south is Shilluk, which has its own small kingdom on the White Nile. Among the many other folk groups are azande, bari, jurchol and acholi.

South Sudanese people belong to so-called Black Sub-Saharan Africa and the vast majority of South Sudanese are Christians or followers of traditional indigenous religions. Many of them harbor mistrust of the Muslim Arab-dominated population of the north. Mistrust goes back to the time when Arab slave traders bought and sold black people in the south. This contradiction was one of several reasons behind the long civil war that ended in the Sudan split in 2011.

As a result of decades of war and widespread refugee flows, all population statistics about South Sudan are uncertain. The margin of error is large. According to the latest Sudanese census of 2008, just over eight million people lived in the South, or 21 percent of the then Sudanese population. The government of Juba in southern Sudan claimed that the south side’s share of the population was higher than that and accused the north side of manipulating the figures that would constitute a basis for the distribution of political items and oil revenues between the north and south.

From 2005, the refugees began to return. According to the UNHCR, 2.5 million people had returned to South Sudan in October 2009, including 328,000 of them in neighboring countries. At independence in 2011, between half a million and one million South Sudanese were estimated to remain in the north, where by a new law they were deprived of their Sudanese citizenship.

After the outbreak of the civil war in December 2013, over two million South Sudanese fled again. Hundreds of thousands left for neighboring countries, while the majority became internally displaced people.

Estimates claim that there are close to two million internal refugees in South Sudan today and that around 2.3 million South Sudanese are on the run in other countries in the region. This means that about every third citizen lives as a refugee. At the beginning of 2020, there were still over 850,000 South Sudanese in Sudan, according to the UN agency UNHCR.

South Sudan’s transitional constitution (see Political system) states that English is an official language but also recognizes all local languages. The English as a common social language has been a symbol of resistance to the attempts to Arabize the South made by the central government in the north before independence. In and around the capital Juba, so-called Juba Arabic (a kind of pidgin variant of Sudanese Arabic) is usually spoken between residents of different native languages. Among the local languages, Dinka, Nuer, Bari, Zande and Shilluk are the largest. Dinka is spoken by between two million and three million residents. Many of the South Sudanese languages ​​are nilotic, but some, such as azande, belong to the Niger Congo languages.

English is the official language; Arabic is common in and around Juba; a number of local languages, of which Dinka is the largest

Mediation in the conflict over Abyei

The North and the South agree to allow the Permanent Arbitration Tribunal in The Hague to mediate in the conflict over the oil-rich Abyei border district.

The north side is increasing its military presence in the oil-rich Abyei as a result of the south side’s appointment of its own administrative head in the disputed border district (see March 2008). New battles erupt.

A census in both the north and the south begins. Among other things, it will form the basis for the planned referendum on independence for South Sudan, and for the distribution of resources, such as the oil, following a possible division of the country. In South Sudan there are suspicions that the north side intends to manipulate the figures to their own advantage.

Struggles in the oil district of Abyei

The SPLM military branch of the SPLA government clashes with the Arab militia in the disputed, oil-rich Abyei, which lies on the border between the north and the south. The Government of South Sudan appoints its own administrative head of Abyei, despite the fact that the area under the CPA peace agreement (see January 2005) is jointly governed by the north and south.