South Africa’s population increase is among the lowest in Africa. Decreased infant rates and higher mortality due to AIDS are recording. Today, 2.2 children are born per woman, down from 6 children per woman in the 1960s. However, great immigration from other African countries is ongoing, but since these immigrants are often paperless, reliable statistics are lacking. 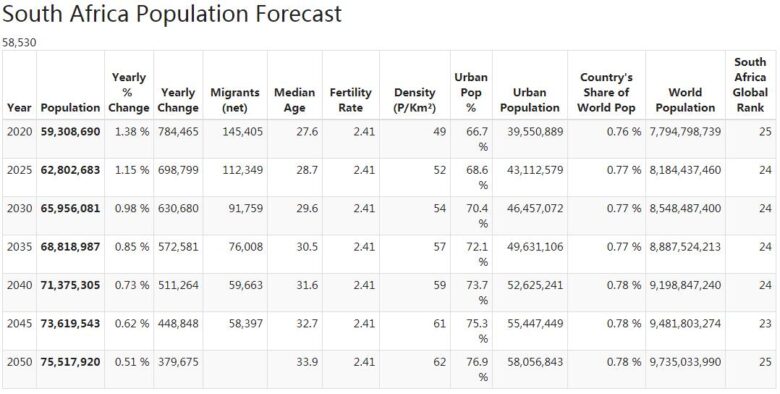 Under the racial segregation policy, apartheid, which was applied from 1948 until the early 1990s, the population was divided into four main groups – Africans, Europeans, colored and Asians. The groups were kept separate by special laws (see History). The racial segregation laws have now been repealed, but the division into four main groups has been retained. However, the old names of Africans and Europeans have become more unusual. White South Africans claim to also be Africans, in the sense of native Africa, rather than Europeans. Nowadays, the terms black, white, colored and Indian (Asians) are usually used.

The blacks make up about 80 percent of South Africa’s population and belong to some of the Bantu people. The largest are the Zulu people whose core area is the KwaZulu-Natal province in the southeast. Xhosa is the second largest population group, mainly concentrated in the Eastern Cape Province in the south. Pondo, thembu and some smaller groups have been assimilated into the xhosa community. (Nelson Mandela was the thembu.) Other black people in South Africa are swazi, sotho, tswana, venda and shangaan tsonga.

More than half of the 4.6 million whites are Africans, who were previously called farmers. Boer really means “farmer”. They are descended from Dutch, French, German and Scandinavian settlers who immigrated from the mid-17th century.

The second largest white population is the English speakers. Most are descendants of Britons who arrived in the 19th century, when diamond and gold deposits were discovered. Portuguese immigrated since Portugal’s colonial rule in southern Africa collapsed in the mid-1970s.

The white population decreases by about half a percent per year, due to emigration and low birth rates.

Most Asians in South Africa are of Indian origin. The English had long recruited Indian workers to their sugar plantations in the southeast, while Chinese were recruited to work in the mines. Most Chinese were sent back to China in the 1910s, while the Indians were allowed to stay. The Indians are still concentrated in KwaZulu-Natal, where Durban is usually called the world’s largest Indian city outside India.

The South African indigenous people are khoikhoi and san / bushmen (both short-grown with yellow-brown complexion). They have lived throughout sub-Saharan Africa for tens of thousands of years. They are not counted among the Bantu people. From the 17th century onwards, they were pushed away by agricultural and livestock bantu people from the east as well as by white settlers from the southwest. Of the Khoisan, which both groups are now referred to as, only a small peoples pillar lives in the Kalahari desert in the northwest.

The colored ones are of mixed origin. They come from white immigrants, from the Khoisan, blacks and Asians. Today, the colored people define themselves as a distinct ethnic group. It seems that colored people would rather be called “brown” in analogy with white and black. The majority live in the Western and Northern Cape provinces, where the Dutch settlers originally settled. In these two provinces, which on the surface correspond to half of South Africa, they constitute colored majority populations, while whites and blacks are the largest minorities. However, a large number of blacks are moving in to the Western Cape Province, which may change the picture.

Since 2001, according to official statistics, 2.7 million Africans from the rest of Africa and 100,000 Asians have moved to South Africa. During the same period, approximately 340000 whites left the country. The largest immigrant group is Zimbabwe. The large immigration from neighboring countries has caused conflicts with poor South Africans who accuse foreigners of taking their jobs, going ahead in housing queues and engaging in crime. Both in 2008 and 2015, a wave of violence was launched against immigrants demanding 50 repectitive 10 lives.

The blacks usually speak bantu languages, which are divided into four related groups: nguni, sotho, tsonga and venda. Languages ​​spoken by the khoisan do not belong to the bantu languages, but they have affected some of them. Khoisan’s click sounds can be found, for example, in the Xhosa and Zulu languages.
The largest language is Zulu, spoken by the country’s 11.6 million Zulu. Then follows xhosa, african and english.

English is the first language for just under a tenth of the population, about five million. Of these, a third are white. Although English comes first in fourth place among the country’s languages, it is greatest in teaching, even at primary school level. Therefore, the tendency is for English to spread at the expense of the other languages. Since English has become such a common second language, today it is practically practically everywhere.

The language of Africans is Afrikaans, which has roots in the Dutch of the 17th century. Most colored people also speak Afrikaans as their mother tongue, but English is becoming more common. Of the 6.9 million who speak Africa’s home, a minority are white, about 40 percent.