More than half of the residents live a traditional life in the countryside, built on self-catering. In recent years, however, more and more Guineans, mainly young men, have moved to the larger cities. By 2025, as many as 42 percent of the population is expected to live in Bissau. In the hope of finding a job, many Guineans also try to get to neighboring countries, Europe or the United States. 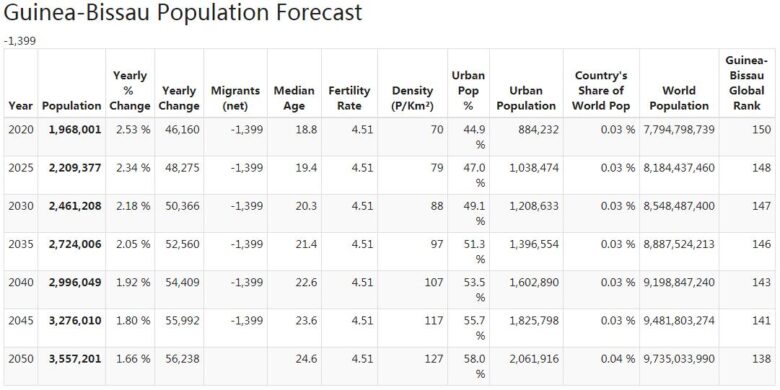 Population growth is high and by 2020 the population is expected to exceed 2 million. In 2015, almost half of the residents were under the age of 18.

There are about twenty groups of people who are very different among themselves. The largest is the balante (balanta) that lives in communities where you have a lot in common. Balante also played a major role in the opposition to the Portuguese colonial power. The larger peoples also include uga (fulani), mandjako, mandinka (malinke), papel and diola. The biggest differences are between the people who profess Islam and those who practice indigenous religions. Among the ugly and mandinka are many Muslims. These people live in hierarchically organized societies where religious leaders have great influence.

About one percent of the population is of mixed African/Portuguese origin.

In Bissau, Portuguese, Cape Verde and European Guineans form a small elite. Many traders are Lebanese, Syrians or Mauritans.
Most Guineans living abroad are in Portugal, Senegal, The Gambia and Spain. The money they send to relatives in the home country provides an important contribution to the country’s economy (see Economic overview).

When Guinea-Bissau became independent in 1974, it was denied that there were any contradictions between different peoples groups, but gradually tensions have risen to the surface, especially between Balante and other peoples, largely due to Balante’s dominant position in the army. However, in the soldier uprising that in 1998 led to an eleven month long civil war (see Modern history), all the people groups were represented. The war demanded thousands of casualties and 360,000 Guineans fled inland.

Earlier in the 1990s, tens of thousands of Senegalese had moved to northern Guinea-Bissau to escape fighting between the Senegalese army and the separatist movement MFDC in southern Senegal (see also Foreign Policy and Defense). Of the approximately 8,600 refugees in the country in 2015, almost all came from Senegal. The refugees move back and forth across the border depending on the situation in Casamance. Many of them have relatives in both countries. Farmland has been provided for those who have lived in Guinea-Bissau for a long time, which has enabled them to support themselves. However, the lack of resources has led to some tensions between the local population and the refugees.

In 2011, the government announced that refugees who had lived in the country for more than 20 years would be offered the opportunity to become Guinean citizens.

Nearly 20 local languages ​​are spoken in the country. The different peoples usually cannot understand each other’s language. Crioulo – which mixes Portuguese and various African languages, is used as a means of communication between the groups. Only a minority of the population is fluent in Portuguese, while French is spoken by well-educated Guineans and in the border regions.

Gomes remains as head of government

Riot in the attack on the president’s residence

On November 23, soldiers are reported to have attacked the president’s residence. One soldier in the Presidential Guard is killed and several injured. However, the president and his family are able to get away with injuries. Five militants are arrested on suspicion of involvement in the attack.

PAIGC achieves almost half of the vote

The election is won by a clear margin of PAIGC, which receives almost half of the votes and 67 of the 100 seats. The next largest party will be receiving more than 25 percent of the vote and 28 seats. Also a new party, the Republican Party for Independence and Development (PRID), and the New Democratic Party (PND) are winning seats in parliament. The turnout is high, 82 percent. According to the election observers, the election has been carried out correctly. However, Kumba Yalá PRS claims that irregularities have occurred.

21 parties and two party alliances participate in the election, but only nine of them can afford to run any more extensive campaign.

Parliamentary elections will be held on November 16 under peaceful conditions. The big questions during the electoral movement include drug trafficking (see Guinea-Bissau and drugs). About 150 observers from the EU, the West African cooperation organization Ecowas and the UN are monitoring the election.