The media image in Somalia has been changing since the 1990’s, partly as a result of the civil war and the political situation, partly because of the technological changes. After the Civil War, which led to a change of regime when President Siad Barre was overthrown in 1991, Somalia is partly divided, with two regions declaring independence or autonomy: Somaliland and Puntland. The conditions there are somewhat different from the rest of the Somali Republic, also with regard to the media situation.

Somalia’s media history dates from the time before independence in 1960, and one of the pioneers of the broadcast, Guglielmo Marconi, who was involved in the first radio operation in Italian Somaliland in 1911; the first such in Africa.

Prior to the regime change in 1991, during the reign of Siad Barre, who pursued a socialist-oriented policy, the Somalia press and broadcasting business was subject to the Ministry of Information, and thus state control. The country had up to five newspapers, but one dominant daily newspaper: Xidiga Oktobar (the October star). Several magazines were published; they too were state controlled. There was also a state news agency; Somali National News Agency (SONNA).

There were two state-owned radio stations; one in Hargeisa and one in the capital: Radio Mogadishu. It was originally started by the Italians in 1951. Somalia received television funding in 1983 from Kuwait and the United Arab Emirates.

The media landscape changed during and after the war. For a long time, there were relatively few players due to the resource and security situation, and in particular many radio stations have been added. 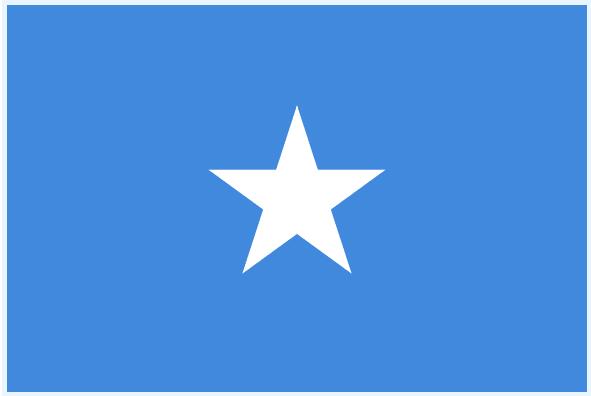 The parties in the civil war quickly established their own radio channels. Former state-owned Radio Mogadishu was taken over by clan leader Muhammad Aidid. Other clan leaders, Uthman Ato and Ali Mohamed, started their own stations, also called Radio Mogadishu. After the war ended, this is the name of the state federal radio station again. The state-run station in Hargeisa was taken over by the insurgency in Somaliland, and broadcast as the Voice of the Republic of Somaliland.

Radio is the most important media channel in Somalia, and there are several stations in operation, both on short wave and – in particular – FM, and both from the capital (where Radio Shabelle is one of the largest) and other parts of the country, including in Puntland (where Radio Daljir is the biggest) and Somaliland. There is a state radio station (Radio Somaliland) that was originally established in British Somaliland in 1943. A few of the stations broadcast partly in English and Arabic; by the way in Somali.

Televisions are available in the urban areas. Somalia has one state television company (Somali National Television, SNTV) in Mogadishu, and several private actors in several parts of the country. The local government of Somaliland is behind Somaliland National TV (SLNTV) in Hargeisa; Puntland TV broadcasts from Garowe.

There are also private broadcasters broadcasting from abroad, including Canada, the United Kingdom and the United States. Some stations, such as the BBC and Al Jazeera also broadcast towards Somalia.

At the start of the civil war, all newspaper publishing ceased, but several were started in the 1990’s, and by the early 2000’s Somalia had over fifty newspapers; most very small. Later, several newspapers have been financially out-competed by digital media as well as radio and television.

Social media has a somewhat limited prevalence in Somalia, partly due to inadequate infrastructure and partly to low educational levels. In urban areas, the internet is expanding, and several media are using this for their publication. Facebook and Twitter are among the most widely used social media.

During the war there was little regulation of the media. In 2012, a new, temporary constitution came into force, guaranteeing freedom of expression and freedom of the press. A separate media law was passed in 2016. This is disputed, because it can be used to limit freedom of the press. The law requires journalists to have a higher professional education and must undergo a test to obtain a work permit; they may be required to provide government sources, and it will allow the authorities to block websites.

Due to the security situation, not least the activity of jihadists, especially al-Shabaab, journalists and media companies in Somalia are vulnerable to attacks and abuses. The state security forces have also pursued persecution of media workers, and Somalia is considered one of the world’s most professional countries to work for journalists.