About two-thirds of Equatorial Guinea’s population lives on the mainland. The majority of residents belong to different bantu people. They identify themselves primarily with their people or their clan and firstly as equatorial Guineans. The largest group is fangs, which make up perhaps four-fifths of the population. 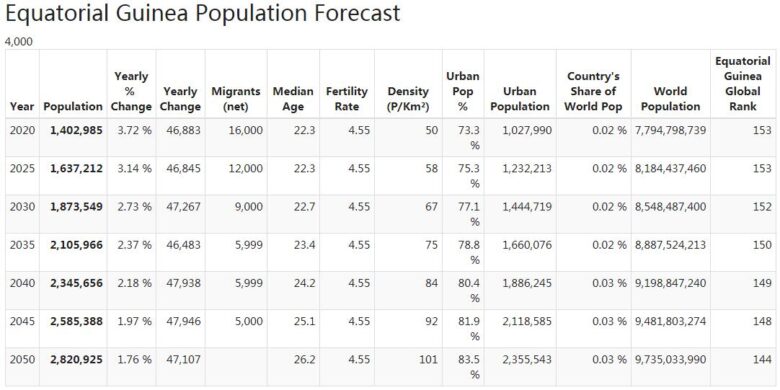 The prisoners who are also in Cameroon and Gabon are divided into nearly 70 clans. Among them is the current president Teodore Obiang’s clan, esangui, as well as the mongomo clan that many in the elite of society belong to. Along the coast are minority people, often called playeros (“those who live by the beach”), like balengue and bujeba.

The indigenous people of the island of Bioko, the bubi people, have been forced back by the prison since the 1970s, which today dominates the administration in the capital Malabo. However, Bubi is still in the majority in the countryside.

Relations between bubi and fang are strained and violent confrontations have sometimes taken place. At Bioko there is also the group of the Fernandins, who are descendants of released British slaves.

Population growth was low for a long time because of the dreaded dictatorship of Francisco Macías Nguema 1968-1979. Under Nguema’s regime, nearly a quarter of the population was killed or expelled. The number of Europeans in the country fell from about 7,000 to about a hundred. Today there are some thousands of Europeans, mainly Spaniards and French. There are also a lot of Lebanese and North Africans, Filipinos and a growing Chinese colony.

When the oil boom began in the 1990s, Equatorial Guinea received a fierce stream of immigrants from other African countries who wanted to work in the oil industry. Immigration has been cited as one of the explanations for the widely differing figures for the number of residents circulating. In 2014, the UN estimated the population of Equatorial Guinea to just over 778,000, while the government cited a census made in 2002 that is said to show that the country has a population of over one million.

Spanish and French are official languages, in addition to a number of local languages

The mercenary man is released

Imprisoned British mercenary Simon Mann (see July 2008) is released together with four South Africans who were imprisoned simultaneously. In an interview with Mann’s wife, it appears that he lived a life as a “luxury prisoner” with gourmet food and other benefits, something other prisoners hardly received. It is believed that South Africa’s President Jacob Zuma, prior to a visit to Equatorial Guinea, worked for the men’s release. However, no pardon was issued for the many Equatorial Guineans who were also imprisoned after the alleged coup attempt in March 2004.

President Obiang Nguema again wins a superior victory in the presidential election. According to the official result, he gets 95.8 percent of the vote.

According to Spanish radio, troops loyal to the mercenary Simon Mann try to free him in connection with his hospitalization.