Economy and Business in Burundi


Burundi is an agricultural country with limited natural resources in addition to good agricultural and livestock conditions. The country has some mineral deposits, which are only used to a limited extent, both because of. great distances to shipping ports and the security situation. The civil war of the early 1990s has had a major negative impact on Burundi’s economic development. Uncertainty has led to lower investment in mining operations than expected and declining production in both industry and agriculture. This situation was further aggravated by the financial sanctions imposed on the country in the second half of the decade. These were meant especially to hit the urban elite, which to a large extent consist of Tutsis, but indirectly – along with the war as such – they have also contributed to a significant negative growth in the second half of the 1990s. The sanctions hit both sectors in the absence of imported goods and barriers to exports, although the sanctions were to some extent circumvented through smuggling. War in neighboring Congo (formerly Zaire) from the mid-1990s also led to the smuggling of goods from there. minerals exported illegally – via Burundi. 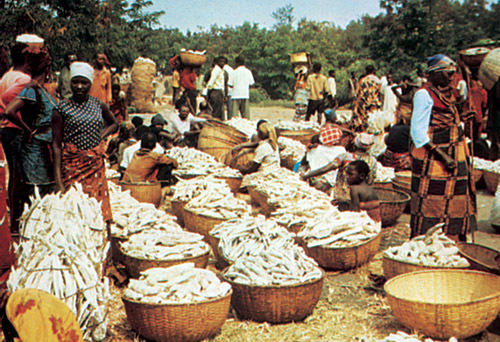 Burundi. A large part of the turnover is done in markets, here from a market in Bujumbura.

Measured by both economic and social indicators, Burundi is one of the world’s poorest countries, and the civil war of the 1990s has significantly worsened the country’s economic and social conditions. By the mid-1990s, it was estimated that approx. 60% of the population lived in absolute poverty, against approx. 30% before the serious war actions in 1993. As a result, approx. 15% of the population flee, with a large negative impact on food production – which in turn led to increasing malnutrition and malnutrition. At the same time, health services were reduced and the prevalence of HIV / AIDS increased – which further contributed to the average life expectancy having fallen since the early 1990s. Burundi is one of the countries in Africa most severely affected by the AIDS epidemic.

Burundi is a very densely populated country, and land shortages are a serious problem, which has also contributed to the social problems. The country has some mineral deposits, but is above all an agricultural community. Burundi’s economy is heavily dependent on the one, dominant export product, coffee, and hence the prevailing prices for coffee on the world market at all times. Tea is the country’s second most important export commodity.

Burundi relies heavily on external financial support, including direct budget support, and the leading aid providers are Belgium, France, Germany and Japan, as well as the EU and multilateral organizations. From 1986, a structural adjustment program was implemented in agreement with the World Bank and the IMF, with the aim of reducing Burundi’s unilateral dependence on coffee exports.

Agriculture employs over 90% of the employed and accounts for approx. 50% of GDP. Food crops such as yams, cassava, rice, sweet potatoes, bananas and beans are grown on lower slopes; in higher regions millet, wheat and barley are grown. The main export crops are coffee and tea; Cotton became a major export item in the late 1980s, but production dropped sharply by the mid-1990s. Investment in sugar production has created a smaller profit for export. Most of the coffee crop is arabica coffee, and approx. 1 million small farmers grow coffee, which in 2000 accounted for approx. 70% of the country’s export revenue. In the same year tea accounted for approx. 25% of revenues. Production, especially of coffee, has varied greatly since the early 1990s, largely as a result of the civil war, and as a result. of price developments in the international markets. In the second half of the 1990s, coffee production was also affected by the sanctions against Burundi, although some were smuggled out of the country. Coffee export revenues dropped to a low of about $ 30 million in 1999; alongside the war, drought also helped to reduce crops. Pastures cover1 / 3 of the area, and livestock are significant at Tutsis, with cattle and goats for meat and milk, and sheep. However, the return is low, in that quantity gives the cattle social significance. In the early 1990s, however, hides were a significant export item, but the war has also affected livestock.

Burundi’s forests are heavily pressured by lack of land and the use of wood as fuel.

Lake Tanganyika is fishy and there is considerable fishing going on, which, however, has little national economic significance. Fisheries were also significantly reduced in the 1990s, due to the security situation.

Burundi has some proven mineral deposits, but the resources are not yet fully mapped, and they are only exploited to a small extent. The country has one of the world’s richest deposits of vanadium, and significant reserves of nickel. Some gold, tungsten and colombothalanite are mined, but a significant proportion of the gold exported from Burundi comes from Congo (formerly Zaïre) and Tanzania. Petroleum has been detected in Lake Tanganyika and in the Ruzizi Valley, with no recovery started. Several mineral extraction projects were postponed in the 1990s due to. security situation.

The industry is very modest and development is hampered, among other things. of the long distance to ports, as well as of civil war and sanctions in the 1990s. The local market is too small to form the basis for anything other than limited light industry, which consists essentially of processing local raw materials for domestic consumption. Some woodworking also takes place. Ruzizi’s hydropower has been developed in collaboration with Congo, but Burundi is a net importer of electricity.

Burundi has a large trade deficit abroad. The country has been heavily dependent on the one dominant export article of coffee, but from the late 1980s tea has also become an important source of income. The United Kingdom and Germany are the largest markets for exports. Most imports come from Belgium and France, Zambia and Tanzania.

Burundi’s foreign trade is hampered by its geographical location in the middle of Africa, with great distances to sea ports – which also entails transport through one or more neighboring countries. Traditionally, the main ports are Dar-es-Salaam (Tanzania) and Mombasa (Kenya), which are located respectively. 1400 and 2000 km from Bujumbura. Most of the transport traditionally takes place over the sea to Tanzania, and to some extent to the Congo (Zaire), and the road via Rwanda and Uganda to Kenya. Blue. As a result of neighboring sanctions from the mid-1990s, Burundi looked at alternative trade routes, particularly via Zambia to Durban in South Africa.

Burundi has no railway, but plans for a connection of Burundi and Rwanda to the railway from Mombasa in Kenya to Kampala in Uganda, as well as Kigoma in Tanzania, were presented in 1987 – without being launched. The road network is dense but of poor standard. Lake Tanganyika is a very important part of Burundi’s transport system. Bujumbura, along with Rumonge and Nyabisindu, is the most important port city on Lake Tanganyika. Most of the foreign trade goes by ship across Lake Tanganyika, either south to Kigoma in Tanzania and from there by rail to Dar-es-Salaam, or west to Kalemie in Congo (formerly Zaïre), and from there by rail and river transport to Matadi. Bujumbura has an international airport.