Burkina Faso has a young population, nearly half of the population is under 15 years. Population growth is high. Almost two out of three Burkinis live in the countryside, but the move into the cities is great. Northern and eastern Burkina Faso are sparsely populated, while the central parts of the country are heavily overpopulated. 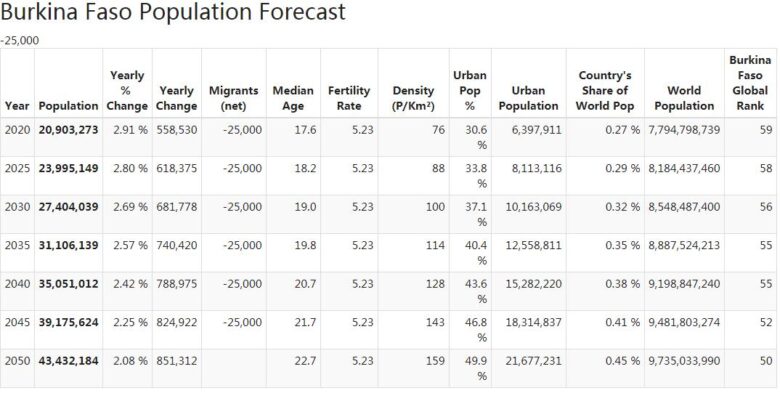 In Burkina Faso there are more than 60 groups of people who speak their own languages ​​or dialects. The languages ​​belong to one of the groups gur (volta), mande or the Atlantic branch of the Niger-Congo languages.

The mossi population constitutes almost half the population. Mossi lives in the northern and central parts of the country and dominates around the capital Ouagadougou. Mossi has traditionally dominated politically and militarily. The Mossi language moré is spoken as a second language by many Burkinis and is especially common in central Burkina Faso.

In the west, many dioles (dyula/Christmas), which belong to the language group mande and speak a trade language in the region. In the West, among others, live bobo, bwa, lobi, senufo, landa and samo. In the deserted northern and northeastern parts there are the livestock peoples fulani and Tuareg. An important group in the south are the Christian gurunsi, who are linguistically related to mossi.

Burkina Faso has largely been spared from ethnic contradictions. When the country was given its current name in 1984, the French nationality designation “burkinabé” (see Modern history) was created by words from the three largest languages ​​moré, dioula and fulani. French is the official language of the country.

Poverty has driven between two million and four million Burkinians abroad in search of livelihood. Many of them work on plantations in Ivory Coast and Ghana. Others have moved to Europe, mainly France. The emigration began as early as the colonial period, but then it happened under duress. However, political turmoil and economic downturn in neighboring countries in recent years have reduced emigration and many Burkinians have returned to their homeland.

During the civil war in Ivory Coast from 2002, the Burkina minority was accused of stoking the conflict, and about half a million Burkinians were forced to surrender to Burkina Faso, despite the fact that many were born in the Ivory Coast. A new conflict in which 2010–2011 also led to harassment against Burkinis.

Burkina Faso has also periodically been a host country for refugees from war-torn neighboring countries such as Ivory Coast and Mali.

French is the official language 1

In the election to the National Assembly, the ruling party receives CDP 70 of the 127 seats. The other parties in the government coalition together receive 28 seats. The opposition UPC wins 19 seats. 10 mandates are distributed to small parties. The turnout is 76 percent.

Compaoré leads talks to resolve the crisis in neighboring Mali, where Islamists have taken control of the northern part.

The National Assembly gives impunity to Compaoré and all other heads of state that the country has had since independence in 1960. Amnestine thus also includes Saye Zerbo and Jean-Baptiste Ouédraogo, who like Compaoré came to power through a coup.

The Red Cross warns that several million people in Burkina Faso and five other countries in the region will suffer famine if they do not receive help within a few months.

The head of customs is dismissed. This happens after his suitcases have been seized containing the equivalent of over SEK 25 million. The Customs Administration is referred to as the most corrupt authority in Burkina Faso.