Lesotho is a kingdom in southern Africa, surrounded by South Africa on all sides.

The country has just over two million inhabitants, the vast majority of whom belong to the Basotho group. Next to sesotho, English is the country’s official language. People have lived in this area for at least 50,000 years. The Kingdom of Lesotho emerged in the early 1800s and later became a colony under the United Kingdom. 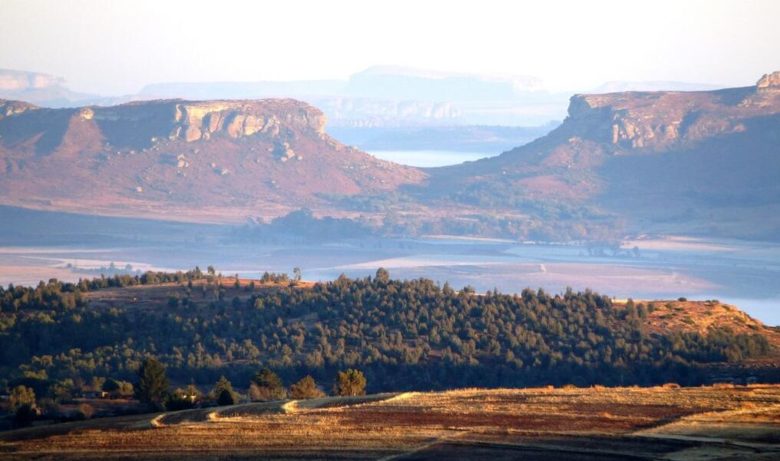 Lesotho consists almost exclusively of mountains. A border river, Mohokare, separates the western part of the country from South Africa, with a crossing point at the capital Maseru. In South Africa this river is called Orange. To the north and east are the Maloti, or Drakensberg Mountains. These constitute a natural border with South Africa. The highest mountain in Lesotho is Thabana Ntleneyana, which reaches 3483 meters above sea level.

Much of Lesotho lies at an altitude of between 1000 and 1400 meters above sea level, and the climate is temperate. There is little available arable land in Lesotho, and the around ten percent that is there are under great pressure. Animal husbandry and agriculture have depleted part of the land and there is little forest available. Furthermore, the many large dam developments have taken precious land.

In the mountains there is snow in the winter months, which in the southern hemisphere are June, July and August.

Lesotho is one of the few countries in Africa based on one population group, the Basotho. The language sesotho is similar to languages ​​found in South Africa, such as tswana, xhosa and zulu. Sesotho is also recognized as one of South Africa’s eleven official languages. About 80 percent of the population is Christian, among the largest churches being the Anglican Church and the Roman Catholic.

Lesotho is among the countries in the world where most live with HIV/AIDS, as many as 22 percent of the population is HIV positive. This means that life expectancy is among the lowest in the world, just over fifty years. This also means that Lesotho has a very young population, about half of whom are under 25 years old.

Lesotho is a constitutional monarchy. King Letsie III is the symbolic figure. Political power lies with a government and a parliament in Maseru. Lesotho’s short political history has been marked by the parties Basotho National Party (GDP) and Lesotho Congress of Democrats (LCD), which sprang from the former Basuto Congress Party (BCP).

Since 2006, LCD has been the dominant party, the largest opposition party has been the All Basotho Convention (ABC). Pakalitha Mosisili from LCD has been prime minister for most of this period, with the exception of the period 2012-2015, when Tom Thabane from ABC was the head of government. Mosisili today heads a coalition government, with LCD being the largest party.

Beside a king and a parliament, Lesotho has an independent judicial system, based on a British model. In addition to the formal legal system, there is also a traditional legal system whose task is to solve local cases.

Bantu- speakers came to this part of southern Africa about 500 years before our time. Before that, the san people dominated the mountains that today are Lesotho. It is believed that the San people have been in the area for at least 50,000 years, including leaving cave paintings.

During the Zulu wars, the Basotho gathered under King Moshoeshoe, who founded Basutoland. In the coming decades, it was no longer the Zulu people who threatened Basutoland, but farmers, descendants of Dutch peasants who expanded from the Cape colony at the southern tip of the continent. The threat from the Boers caused King Moshoeshoe to seek protection from the British, and his kingdom became a British protectorate in the 1860s. But in 1871 the Cape Colony annexed the Protectorate. After protests from Britain, Basutoland became a British colony in 1884.

Eventually the Cape Colony became the South African Union, and then an independent, but segregated, South Africa. Basutoland continued as a British colony until 1966, but almost all economic activity in the country was linked to South Africa. When the country became independent, Jonathan Lebua of the Basotho National Party (GDP) became prime minister. The country also got a new king, Moshoeshoe II, and a new name, Lesotho.

Lesotho quickly became a refuge for South Africans fleeing the brutal apartheid regime. In the early 1960s, several parties and unions were banned in South Africa, many anti-apartheid activists then fled to Lesotho, and from there into the world. The banned South African liberation movement The African National Congress (ANC) established itself in Maseru. This made the relationship between the two countries very tense throughout the 1970s. Following the Soweto uprising in June 1976, Lesotho offered students on the run education.

Some of the refugees also received military training from other South Africans in exile. These then returned to South Africa and carried out both sabotage and attacks on South African police. By 1982, South Africa had had enough and sent the first of several military raids into the small mountain country. More than 100 soldiers participated, and 42 people, including three children, were killed.

Since independence, Lesotho’s policy has been dominated by a few parties. Beside Lebuas Basotho National Party, the Basotho Congress Party had significant support. They led the polls ahead of the 1970 elections, but Lebua set aside the constitution and sent the king into exile. Thus, Lebua carried out a coup d’état. Four years later, BCP tried to come back through yet another coup, but failed. Gradually formed members of the BCP Lesotho Liberation Army (LLA), who became an ally of the South African forces who were constantly invading in search of ANC members. The tension between the two countries culminated in 1986, when South Africa blocked all roads in and out of Lesotho, with the immediate effect that food and supplies became poor.

Twenty days into the blockade, Lebanon’s government was deposed by a military coup. Then followed a turbulent period, in which the king also went into exile, and returned, before in 1993 new elections could be arranged. However, the turmoil did not subside, after riots broke out in Maseru in 1998, and the Southern African Development Community (SADC) regional organization decided to break in and South Africa sent troops to restore order. Since 1998, unrest has continued in politics, but without major upheavals as before.

Agriculture is an important trade route in Lesotho. Around half of the population still produces part of their food themselves. But poor soil conditions still make the country dependent on importing food from South Africa.

In 1986, construction of the Lesotho Highlands Water Project (LHWP) started. The project includes four large ponds, and aims to both regulate water supply and generate electricity to South Africa. Lesotho also has a small tourism industry, the mountains are popular with hikers, both from South Africa and more long-distance travelers. In addition, Lesotho has a textile industry in Maseru.

Lesotho’s most famous author is Thomas Mofolo ( 1876-1948 ). His historical novel Chaka, about the Zulu king Shaka Zulu, was published in Sesotho in 1925 and translated into English in 1931. In the novel he uses material from a rich local narrative tradition. The book about Shaka Zulu is considered one of the first modern African novels, and a major work in the continent’s literary history. Another well-known author is Atwell Sidwell Mopeli-Paul (1913-1994), who wrote about his experiences as a soldier in World War II and life as a guest worker in South Africa.

The National University of Lesotho (NUL) is based in Maseru and can trace its history back to 1945. The Basotho is known for its traditional crafts, especially carpets and garments spun and woven from wool, which are well suited to the cold climate.