Kenya became an independent country in 1964. In the period up to 1982, Kenya had a kind of multi-party system, but in reality one party dominated: Kenya African National Union (KANU). In 1982, Kenya became a one-party state. Democratization started in 1991, but it was not until 2002 that a rallying opposition candidate challenged President Daniel arap Moi and emerged victorious in the election.

Kenya is currently headed by the Jubilee Party, originally an electoral alliance formed prior to the 2013 election – 50 years after the establishment of internal autonomy, hence the name.

Kenya intervened in the war in Somalia in 2011, and has since then faced a drastic increase in terror in its own territory.

As in a number of other African countries, a process of democratization was also started in Kenya around 1990. Despite the introduction of multi-party government, President Moi and the African National Union (KANU) remained in power for a long time. This was mainly because the opposition was divided, both between people and parties, and that the government controlled much of the country’s media.

In the early 1990s, several of Kenya’s aid recipients demanded the introduction of democratic governance. The criticism was particularly directed at human rights violations. At an international conference of aid providers in 1991, all new aid to the country was withheld. The conditions for resuming aid were political and economic reforms over the next six months. In December 1991, Moi gave in and allowed free political activity.

In 1991, the opposition group Forum for the Restoration of Democracy (FORD) emerged, with Jaramogi Odinga in the lead. The Democratic Party (DP) was formed by former Vice President Mwai Kibaki. FORD posed a threat to KANU and Moi in the upcoming elections, but internal disputes, not least personal conflicts, led to the front being split into two parts: FORD-Asili, led by Kenneth Matiba, and FORD-Kenya, led by Odinga. The split resulted in Moi being re-elected as president and KANU getting a pure majority in parliament at the 1992 elections.

The opposition remained divided after the election, and was further weakened by the fact that several prominent members chose to return to KANU. In the mid-1990s, Kenyan authorities accused the group of February 18 Movement (FEM) and its armed branch, the February 18 Popular Resistance Army (FERA), of infiltrating Kenya from Uganda. Authorities tried to link several parts of the opposition to FEM / FERA, which they alleged was led by Raila Odinga, son of Jaramogi Oginga Odinga. 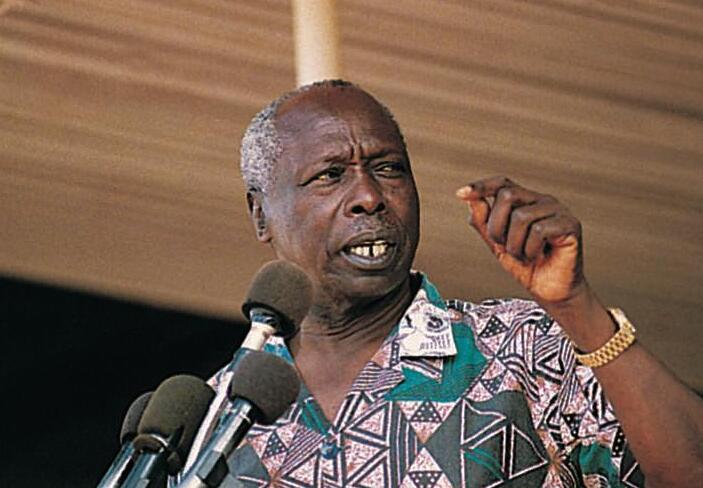 Daniel arap Moi was the country’s vice president from 1967 and succeeded Jomo Kenyatta as Kenya’s president in 1978. Despite an increasingly authoritarian regime, he was re-elected a number of times and was elected president until 2002. -2007.

Relations between Norway and Kenya

Kenyan authorities continued to pursue the opposition in the mid-1990s. A special case concerned former KANU activist and MP Koigi wa Wamwere, who in 1986 was granted political asylum in Norway. As an opponent of the regime, he was accused of being a member of the radical opposition group Mwakenya. When he was arrested and charged with high treason during a visit to Uganda in 1989, the Wamwere case contributed to further weakening Kenya-Norway relations.

Norwegian criticism of Kenya’s human rights violations led to Kenya breaking the diplomatic relations with Norway in October 1990, after which Norway discontinued its assistance to the country after 25 years of cooperation. The diplomatic relations were restored in March 1994. The same year a new lawsuit began against Wamwere, who was charged with attempted armed robbery by a police station – with the possible death penalty as a result. The case was perceived by many as political persecution, with fabricated prosecution and evidence. Wamwere was sentenced in 1995 to four years in prison and six strokes, but the following year he was released and came to Norway to receive medical treatment. In December 1997, the authorities dismissed the charges against Wamwere. He was in the presidential election that year, but received only a few votes. In 2002, he was elected to parliament, but only sat for one term.

In 1996, the four main opposition parties joined the National Alliance (NA). Even in the December 1997 elections, the opposition was divided. President Moi was re-elected and KANU got a majority in parliament. The election showed again that the political divisions in Kenya are far and away following ethnic patterns, where the main parties and their front figures are based and achieve the bulk of their support in their respective peoples groups and regions. Thus, Moi gained widespread support among the Kalenjin people and the two main opponents, Mwai Kibaki and Raila Odinga, among the Kikuyu and Luo, respectively. 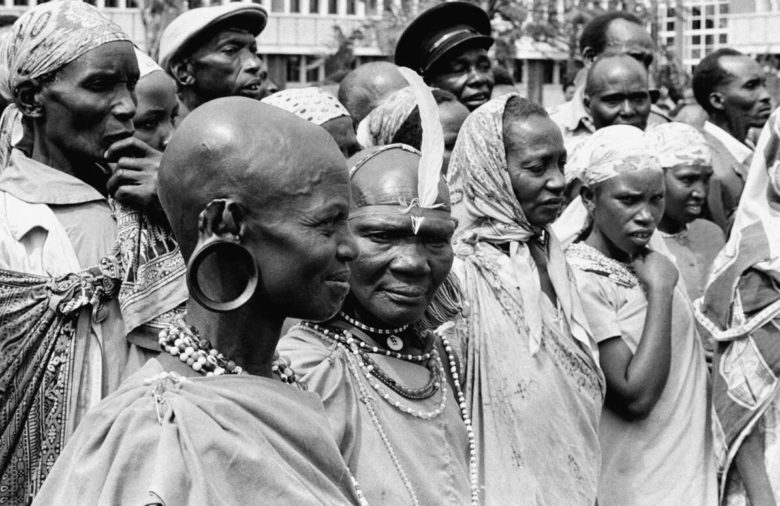 Kikuyu is Kenya’s dominant people group. Kikuyu women in traditional clothing. The photo is taken in connection with the coming President Jomo Kenyatta’s return to Kenya in 1963.

The regime change in Kenya came with elections in 2002. Daniel arap Moi withdrew from politics, and KANU’s candidate was Uhuru Kenyatta, son of the country’s first president. At the same time, the opposition gathered more strongly than before, and the candidate for the new National Rainbow Coalition (NARC), Mwai Kibaki, was elected. The result was similar in the parliamentary elections, where the NARC gained a pure majority and KANU was significantly weakened. NARC was established shortly before the election, as an alliance of 14 opposition parties.

This meant that for the first time since Kenya’s independence, KANU did not sit in power, and that Kibaki – with a past as Kenyatta prime minister and vice president under Moi – became the country’s third president. NARC was a loose alliance; overall to remove Moi and without a firm policy, it experienced rapid internal demolitions. A major challenge for the new regime, in addition to avoiding new acts of violence, was the fight against corruption. Environmentalist and regime critic Wangari Maathai was awarded the 2004 Nobel Peace Prize.

The December 2007 elections are disputed. Prior to the election, Kibaki resigned from the NARC, which had in the meantime been split, to form the Party of National Unity (PNU) in October – a coalition of several parties, including KANU, for which he then voted. The ODM was split in August, with one faction being led by Kalonzo Musyoka, the other by Odinga. Both were running for the presidential election, which however was won by Kibaki, after Odinga led the count for a long time. The official result showing that Kibaki had achieved a majority with 4.58 million votes against Odinga’s 4.35 million was rejected as a cheat by ODM, but remained standing.

In parliamentary elections got ODM clear majority with 99 representatives from PNUs 43. 2007 election was initially marked by political and economic issues and promises of fighting corruption, but also had ethnic overtones, where especially the old antagonisms between ethnic groups Kikuyu and Luo came to surface; Kibaki is kikuyu while Odinga luo.

The 2007 presidential election ended with widespread violence across much of the country after President Kibaki was declared the winner and immediately sworn in for his second term. The inauguration of Kibaki as president triggered spontaneous unrest over large parts of the country, and was subsequently viewed as a coup d’état. ODM proclaimed Raila Odinga as “the people’s president”. After mediation with the then UN Secretary – General Kofi Annan, and with financial support from, among others, Norway, in February 2008, Kibaki and Odinga signed an agreement on the distribution of power, and a unifying government was formed. Requirements for an international tribunal to investigate the post-election violence were rejected by the government in 2009, which was criticized by, among others, US Secretary of State Hillary Clinton.

The violent riots following the announcement of the 2007 presidential election were more extensive than ever in Kenya’s independent history and came as a surprise to the outside world. However, the perpetration of violence followed a pattern in which, especially in connection with the elections throughout the 1990s, and then there were frequent perpetrators of violence in several parts of the country – and above all in the Rift Valley, which was also the site of the hardest clashes at the turn of the year 2007/2008.

The violence is linked to a number of biases and weaknesses with the Kenyan regime, both during the one-party era and after the re-introduction of multi-party rule in 1991. Comprehensive corruption and a practice of favoring certain groups at the expense of others, as well as a growing difference between a rich elite and a poor majority were contributing factors.

The use of violence had ethnic overtones, but at the same time was part of a political game about power and positions, and where ethnic contradictions were exploited in the struggle for votes – and violence between ethnic groups to intimidate and punish voters. It has been shown that both President Moi and his successor Kibaki – as well as opposition leader Raila Odinga – have been stirring up ethnic and social contradictions to weaken their counterpart in elections. Not least, it is played against the dominant population group of kikuyu, which has just been endowed with lands that were formerly owned by white settlers in the rich agricultural areas of the Rift Valley, but which previously belonged to other peoples.

In 1997, violent riots also occurred on the coast, where ethnic groups known to support the opposition were attacked by government supporters; about 100,000 were displaced.

The extensive post-election violence in 2007 was not only a spontaneous reaction to what was perceived as electoral fraud, but partly a planned campaign to play the ODM ethnic card, and to plan for riots in the event Kibaki won the election. On the other hand, attacks by the kikuyu militia supporting the PNU in Naivasha and Nakuru were planned – and violence perpetrated against other groups of people. The police and its special squadrons also contributed to the deaths of more than 1,000 people following the 2007 elections; over 300,000 were displaced from their homes.

Government spokesmen accused Odinga’s supporters of being behind organized ethnic cleansing, while Odinga accused the government of being responsible for genocide. Violent clashes between Kikuyu and Luo militia, respectively, have also originated in the fight for control of criminal activities, including alcohol sales.

Kenya has also been exposed to international terrorism. In August 1998, a car bomb exploded outside the US Embassy in Nairobi (and at the same time in Dar es Salaam ) demanding 254 lives; over 5000 were injured. The attacks were linked to the al-Qaeda network. The same was attacked against the Paradise Hotel outside Mombasa in November 2002, as well as the shooting of an Israeli aircraft with rockets. With state dissolution in neighboring Somalia and Yemen, there is widespread fear in the West that these will become hot spots for international terrorism, making the value of Kenya as an ally all the greater.

In September 2013, the Somali terrorist group al-Shabaab hit the Westgate shopping center in Nairobi ; over 60 people were killed.