Jesús de el Pozo bet for next season Autumn-Winter 2008/09 with a collection that projected a time tunnel between the values of the feminine ideal of chivalric epic and the woman of the future, that is to say, a mixture of the past and present, ancient and modern. The Madrid-born designer, the second to present their new collection on the day of beginning of the Pasarela Cibeles, opts for elaborate dresses, austerity of structures on jackets and coats and wide layers that cover the body.

Inspired by the middle ages, Well used drapes worked as shell and adjusted to the body, which are perceived clearly pleats to the purest style of the armor of the time, and gives shape to skirts and dresses, which gives the clothes a lightweight appearance. The roughness of style He referred to does not diminish comfort to the tissues of the designer, in which premium wools, silks, matelasse, gauze, artisan point and different skins.

In terms of color predominate the Purple, blue, green, Brown, copper and dark grey with iridescent, illustrated by Diseaseslearning.

With a shocking scene in which the designer moved to the time of romances with the sound of stepping on horses on the pavement, peal of bells and the sound of the wind, the well uses of broad layers and coats, with large bags, gloves chiffon and bold head ornaments that is only exposed face. One of the more tender moments was the presence, at the end of the parade, from a baby on the catwalk as “a nod” to motherhood, in the arms of actress Maite Nieto, who wore a wedding dress to pass close reminiscent to the past.

John Kortajarena, the only male model of the parade, dressed in a shiny white jacket, ugly, truth, although as gateway it is logical to see these fantasies, gave an idea of the designer prom line, as well as his companion, with a long evening dress with Rhinestones applications and semitransparencias very nice, in the same style as the rest of garments, a breastplate.

A very elaborate, full of details, parade which broadly yes I liked, and that without a doubt It is aimed at a serious and elegant woman.I love dresses. 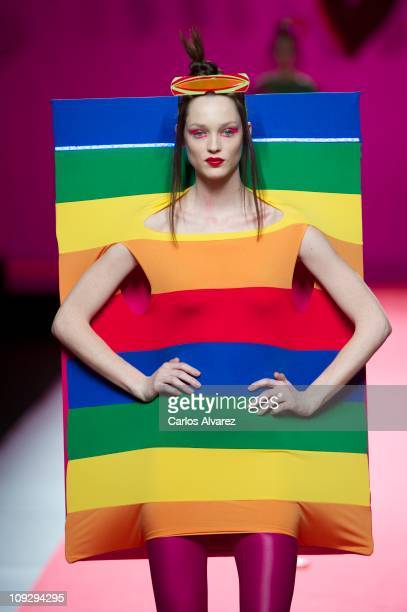