The Rift Valley, which is considered the hotbed of modern man, traverses Zambia, and several of the human ancestors lived in Zambia. Primitive stone tools have been found for early hominids, which are around two million years old. Up to 400,000 year old pigments, which may have been used for body painting or cave paintings, have also been found near Lusaka. 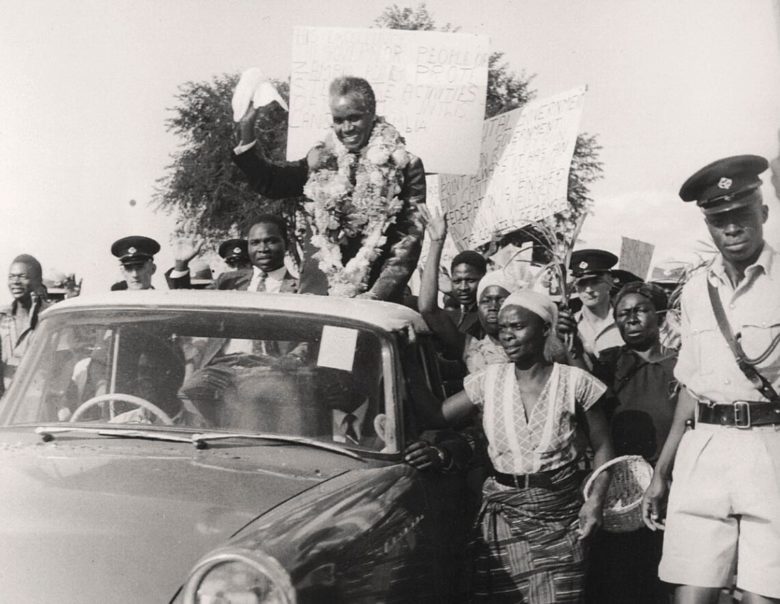 Kenneth Kaunda, leader of the United National Independence Party (UNIP), returns from London in 1963 following his speech for an independent Northern Rhodesia. The following year, in 1964, the country became an independent state under the name of Zambia, with Kaunda as president.

The oldest signs of modern people in Zambia are 25,000 years old. The area was populated by San people, who were hunters and gatherers, when the first bantu came in the 300s, and up to the 1200s, bantu came in several waves east and north, during what is known as the great bantu expansion. Bantus Drive agriculture and made tools of iron and copper. The San people were assimilated or displaced.

The first European to arrive was the Portuguese explorer Francisco de Lacerda in 1798. In the mid-1800s, Scottish missionary David Livingstone traveled on a series of expeditions in southern and eastern Africa. In 1855 Livingstone became the first European to see the waterfall the locals called Mosi-oa-Tunya (“the thunderous smoke”). Livingstone named the Falls Victoria Falls, after British Queen Victoria.

In 1895 the area was officially named Rhodesia. What is today Zimbabwe was called Southern Rhodesia, while the area north of Zambezi was divided into Northwest Rhodesia and Northeast Rhodesia. In 1911, the two territories were merged into the Northern Rhodesia colony, and in 1923 the British South Africa Company entrusted the administration of the colony to the United Kingdom.

The African nationalism wave that swept across Africa in the 1950s also reached Northern Rhodesia, where the liberation struggle was first led by Harry Nkumbala and his African National Congress ( ANC ) and later also Kenneth Kaunda and the United National Independence Party (UNIP). In 1962, elections were held, giving Africans a majority in the Northern Rhodesia Advisory Council. The Council decided that Northern Rhodesia should withdraw from the federation, demanding full internal autonomy and a new constitution.

The federation was dissolved on December 31, 1963, and in 1964 elections were held, in which Kenneth Kaunda was elected prime minister. On October 24, 1964, Northern Rhodesia became the independent republic of Zambia, with Kaunda as president. In 1973, he introduced a one-party government, with UNIP as the only legal party.

Financially, the young nation had a slow start. Low education among the population, poorly developed infrastructure and conflicts in neighboring countries contributed to slowing economic development. Since Zambia became a multi-party democracy in 1991 and the economy gradually opened, the country has gained momentum in the economy.