By independence July 1, 1962, Rwanda-Urundi was divided into today’s two states: the Republic of Rwanda in the north and the kingdom (since the 1966 Republic) of Burundi in the south. Burundi’s head of state became mwami Mwambutsa 4. The monarchy played an important unifying role. The king sought a balance between Hutus and Tutsis in the government, but the power relationship remained skewed, partly because the most important state-supporting institutions, the army and bureaucracy, were largely dominated by Tutsis. This contributed to increased polarization between Hutus and Tutsis, and the monarch’s strong position could not prevent escalation of violence.

A newly formed Tutsi-led youth organization, Jeunesse revolutionaire rwagasore (JRR), was behind riots targeting hutus in 1962. In 1965, Prime Minister Pierre Ngendandumwe, a hutu, was murdered by a Tutsi refugee from Rwanda. The Hutu won the election clearly that year, but a ganwa was appointed new Prime Minister, and reforms in the governance set reduced the Hutu’s influence. The answer was a coup staged by Hutu soldiers in October 1965, and the prime minister was killed. The rebellion was quickly defeated by other parts of the army, under Tutsi leadership, and the coup powers – as well as several Hutu politicians – were executed.

Nearly the entire political Hutu elite was killed, along with several thousand civilians, both Hutus and Tutsis. In July 1966, King Mwambutsa, who had been in exile, was deposed by his son Charles Ndizi, who took the title of Ntare 5 and appointed Captain Michel Micombero as prime minister. Four months later, Micombero made a coup, deposed the king and proclaimed the Republic of Burundi.

New clean-ups of hutu among officers and politicians further upset the striving balance, and the Tutsis dominated. In 1972, a group of Hutus tried to seize power through a coup, but failed. The coup attempt resulted in mass killings of Tutsis around the capital, and was answered with a massacre of Hutus under the auspices of the Tutsi-dominated army, where as many as 150,000 to 200,000 were killed; around 200,000 fled to Congo, Rwanda and Tanzania.

Micombero was re-elected as president in 1974, but was deposed in a coup in 1976, led by Colonel Jean-Baptiste Bagaza. In 1987, Bagaza was deposed in a military coup followed by Major Pierre Buyoya, with increasing repression of all opposition. Buyoya relied on the same parts of the Tutsi hierarchy as its predecessor, which also dominated the army. In 1988, a major government change was made, with, for the first time, a majority of Hutus. But the Hutu’s demands for greater influence in the army were not met. After a group of Hutus killed hundreds of Tutsis north in Burundi in 1988, the army massacred about 20,000 Hutus. Later that year, a hutu was appointed prime minister. In 1989, several coup attempts took place, staged by supporters of deposed President Bagaza.

The tension between Hutus and Tutsis persisted through violent clashes in Bujumbura and elsewhere in the country in 1991, but a democratization process in the early 1990s led a long way to reconciliation. A broad-based commission in 1990 presented a charter for national unity, which was passed in a referendum in 1991, but rejected by the exile party Parti de libération du peuple Hutu (Palipehutu).

A new referendum in 1992 passed a constitution based on multiparty rule, and free elections were held in 1993. It was won by the Hutu-based Front pour la démocratie au Burundi (FRODEBU), which then formed the government with UPRONA in opposition. Melchior Ndadaye from FRODEBU was elected president, ahead of Buyoya, who chaired UPRONA. For the first time, Burundi was ruled by representatives of the Hutu majority, both through the presidential office and parliament – without the Tutsis losing their influence completely, including by holding the prime minister’s post.

President Ndadaye was assassinated when a group of Tutsi officers in October 1993 tried to seize power. The coup failed, but led to extensive acts of violence in which as many as 25,000 to 50,000 people may have been killed. In addition, three quarters of a million people fled the country, most of them to Rwanda. As new president, the National Assembly elected Cyprien Ntaryiamira from FRODEBU, who took office in 1994. Just two months later, he perished on his way home from regional peace talks in Tanzania when his plane was shot down over Rwanda – the incident that started the genocide in neighboring countries. The President of the National Assembly, FRODEBU leader Sylvestre Ntibantunganya, took over as head of state.

The work to resolve the conflict continued despite these events, and included constitutional changes aimed at establishing a balance of power between the two largest peoples. At the same time, an agreement was negotiated between the two largest parties, FRODEBU and UPRONA, which aimed at a more balanced distribution of central power. This September 1994 agreement provided 55 percent of the positions of ministers, governors and ambassadors to the 1993 election winner, FRODEBU; the rest to UPRONA and its allies. The Tutsi dominance of the armed forces was maintained. A national security council was established at the constitutional amendment.

The conflict continued with frequent acts of violence from both the government and militia groups. The attacks against the civilian population increased in strength in the fall of 1995 and winter of 1996. Following the Rwanda genocide in the spring of 1994, tensions also increased in Burundi, partly because 200,000 Rwandan Hutu refugees joined them. From 1995, the conflict spread to all parts of Burundi and developed into a civil war with several actors on both sides. 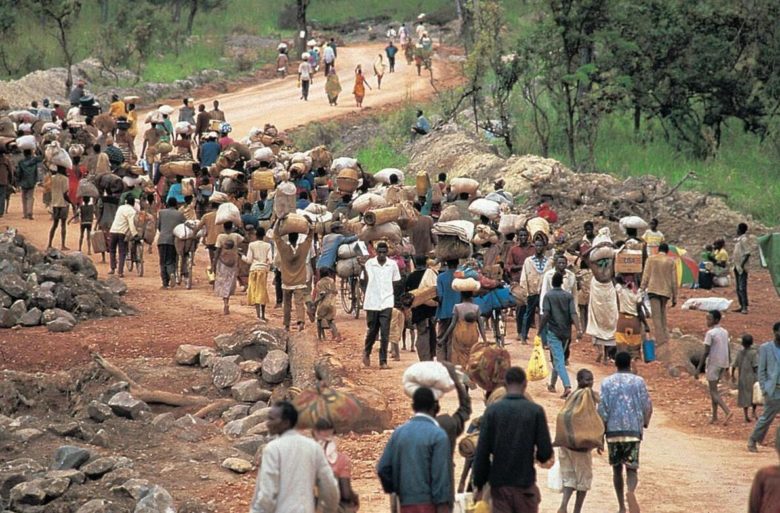 The civil war between Hutus and Tutsis led to the exodus of many. The picture shows hutus on their way to a refugee camp after the border with Tanzania was closed.

Dominating the Hutu groups were the Forces pour la Defense de la Democracy (FDD), the armed branch of the National Council for the Defense of La Democracy (CNDD) and the Palipehutu militia Forces national pour la libération (FNL). Militia groups were also formed on the Tutsi side. Front national pour la libération du Burundi (FNLB) and Parti pour le redressement national (PARENA). It is believed that the Hutu militia received weapons from the Interahamwe militia in Rwanda. Some of the Tutsi groups cooperated with and were to some extent equipped by the government army.

In the fall of 1993, the Organization of African Unity (OAU) decided to send a group of military observers to monitor the situation in Burundi. The same year the UN sent a political mission, led by Norwegian diplomat Martin Huslid, to the country. Peace initiatives from both the EU, the US and Norway did not go ahead, and it was not until 2004 that a UN force was deployed in Burundi. At that time, a peace process at the regional level, at the initiative of the UN, had continued since the fall of 1995, with mediation by Tanzania’s former President Julius Nyerere. After Nyerer’s death in 1999, South Africa’s former president Nelson Mandela took over as a broker.

In June 1996, the armed forces seized power, and former President Pierre Buyoya became the new head of state. The National Assembly was dissolved and political parties banned. Buyoya pursued a policy of giving greater influence to the Hutu; negotiations stalled on the fact that the Tutsis would not give up their decisive position in the armed forces. A constitutional amendment in 1998 strengthened the work of reconciliation and expanded the National Assembly to allow for a wider composition. The Prime Minister’s post was removed in favor of two Vice Presidential positions, one reserved for the Hutu.

Several rounds of negotiations and ceasefires in the second half of the 1990s did not progress. In 1999, several smaller Tutsi parties joined forces with UPRONA and FRODEBU in a new party, the Convention national pour la paix et la reconciliation (CNPR). Some Hutu groups joined the Union pour la liberation national (ULINA). Following new negotiations led by Mandela, an agreement was signed in 2001 on a transition board. It meant that Tutsis and Hutu would occupy the presidential post for periods of 18 months each, with Tutsi Buyoya as president and the Hutu Domitien Ndayizeye as vice president. The latter took over as president in 2003. A transitional parliament was inaugurated in January 2002, a new Senate joined in February.

The agreement was overseen by an African peacekeeping force and South African soldiers deployed in October 2001. The ceasefire was repeatedly broken, with new fighting in 2003. A new agreement was signed in October 2003, after mediation under the leadership of South Africa’s President Thabo Mbeki. The rebels had a breakthrough for the demand for a broader army, with the integration of their soldiers, as well as a greater number of positions in government and parliament. One of the two major militia groups that had not signed the 2001 agreement, the CNDD-FDD, signed in November 2003, while the other, the Palipehutus Force Nationales pour la libération (FNL), continued its military actions for the declared ceasefire in April 2004. The OAU Peace Force was replaced in 2003 by the first force fromThe African Union (AU): African Mission in Burundi (AMIB) with 2870 soldiers, most from South Africa, the rest from Ethiopia and Mozambique. The AMIB was deployed pending a later UN peacekeeping force. This one, United Nations Operation in Burundi (ONUB), took over after AMIB in June 2004.

During a major operation in 1997-98, the army strengthened its power by forcing large parts of the civilian population into camps, under the pretext of protecting them from the Hutu militia. Opponents of the policy stated that the forced move was intended partly to cut off the Hutu militia’s contact with the civilian population and partly to give the government forces more leeway in their attacks against the militia.

The civil war in Burundi has had dramatic human and social consequences, not least because many have fled their homes. At most, at the turn of the year 1999/2000, around 900,000 people were internally displaced in Burundi, while around 290,000 were living as refugees in neighboring countries. In addition, about 200,000 of those who fled in the 1970s have settled in Tanzania. Burundi has also been a beneficiary of refugees from neighboring countries, especially Rwanda and DR Congo. In 2003, there were approximately 40,000 refugees from DR Congo in Burundi.

It is estimated that nearly 300,000 people have been killed as a result of the Burundi conflict, two-thirds of them in the 1990s; the vast majority of civilians. Both the government army and the various militia groups have been involved in serious human rights violations.