Tunisia can roughly be divided into four natural geographic zones; the mountainous area in the north, the extensive steppe plateau in the central parts of the country, and further south, the area with drainage-free swamps and salt lakes. Further south, the country extends into the Sahara desert.

The northern part is dominated by the Atlas Mountains, which are divided into Tell-Atlas and Sahara atlas by the fertile Medjerda Valley, which is the country’s richest agricultural district. Tell-Atlas is located in the far north, and is made up of crystalline massifs, with limestone and sandstone peaks steeped in the weather. The Sahara Atlas is a continuation of the High Atlas (Morocco), and is entirely built up of limestone and sandstone. The highest point is in Jebel Chambi (1544 masl), near the border with Algeria. The coastal land to the east is a hilly country of Jurassic and Cretaceous rocks. The Cap Bon peninsula extends into the Mediterranean to the northeast. From here it is only 140 km across to Sicily (Italy). 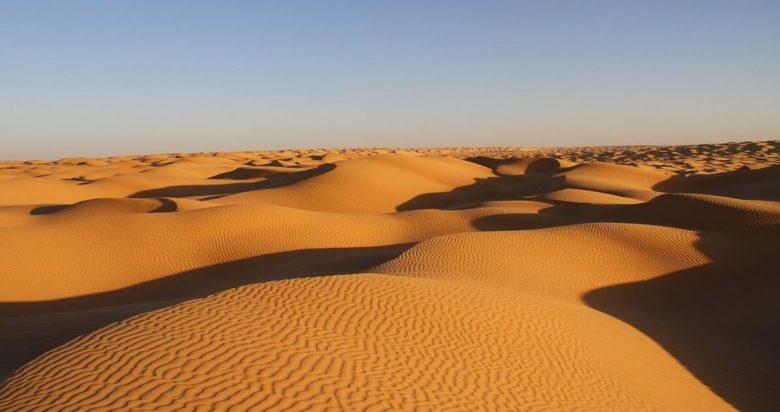 The central parts of the country consist of a steppe plateau, which is highest in the west, with an average height of over 500 meters. The eastern part is between 180-500 meters above sea level. To the south of the steppe plateau is an area that runs across the country and is characterized by drainage-free swamps and salt lakes ( chott ). salt lake Chott al- Djerid.

In the Gulf of Gabès or Little Syrte, the islands of Djerba and Kerkenna are located. The longest river is Medjerda, which comes from Algeria and flows into the Mediterranean north of Tunis, 450 km long.

Tunisia has southern steppe and desert climate, northern Mediterranean climate, with hot, dry summers and mild, humid winters. Average annual rainfall in the north is approx. About 500 mm of precipitation in winter. The regional differences are large. The mountain areas have more than 1000 mm of annual rainfall. The driest is the areas in the south, which have an average annual rainfall of about 100 mm. The entire country has a marked drought period in the summer. Apart from the northeastern mountain country, the evaporation is greater than the total rainfall. The average temperature in January is approx. 10 ° C and in July 26-28 ° C. Inland, summer temperatures can rise up to 50 ° C, especially in the desert regions farthest south. Winter temperatures in the highlands can fall below freezing, and snow occurs. The coastal areas are affected by the sea and have more even temperatures than inland.

The temperatures stated are the average daily maximum and minimum for the month in question.

Plant and wildlife in Tunisia

In the south there is desert vegetation with some oases. Most of the country has shrub and grass steppe with alpha grass and a large variety of species belonging to the Mediterranean flora. In the mountains, cork oak and aleppo fur grow.

Nearly 80 mammal species occur, but large species such as lion, cheetah and mantle antelope have disappeared or are on the verge of extinction. Gold jackets and foxes occur in steppe and desert areas. Atlas, dama and white gas cells are threatened, while the dorkas gas cell is somewhat more prevalent.

More than 390 bird species have been observed, almost 190 of which have been recorded nesting. White-eyed, white-headed and marble ducks in lakes and endangered species such as the Mediterranean gull (formerly: audouin gull) and eleonora falcon on islands off the coast of the north. Tens of thousands of birds of prey, distributed in 23 species, as well as stork and tear, pass over Cape Bon during the migration. Of breeding birds of prey can be mentioned donkey vultures, black-tailed eagles, eagles and king-eagles, tower and perch. Four sand chickens, larches, quicksand, rock and desert sparrows and trumpet finches in semi-desert and desert areas.