Economy and Business in Benin


Benin is primarily an agricultural country with modest natural resources. A relatively high proportion of the population lives in cities and towns, among others. because of. a significant public service sector and a certain degree of industrial production, mainly on the coast. Benin is a poor country, and about 1/3 of the population lives below the poverty line. After many years of low economic growth, there was an upswing in the 1990s, as a result of economic reforms, which also led to increased foreign investment.

Benin’s economy is closely linked to the regional power of Nigeria, and the country is very vulnerable to the political and economic development there. When Nigeria closed the border for a period in the 1980s, this led to economic depression in Benin. A large part of Benin’s merchandise is based on the influx of goods from Nigeria, including for further export – and a significant portion is smuggled. As with other African countries, Benin’s economy consists of two sectors; an official and an unofficial. The unregistered trade with Nigeria falls under the latter; so too do the significant parts of agriculture that produce substantially for local consumption. The important agricultural sector consists mainly of small farms, which grow most of the food crops for self-storage and partly for products for sale, including large quantities of cotton for export. Just as Benin’s economy is exposed to changes in its relations with neighboring Nigeria, it is vulnerable to fluctuations in cotton prices in the international market. The economy was booming in the 1990s, which was mainly attributed to the economic reforms initiated by the presidentMathieu Kérékou ‘s first presidential term, and was followed by successive governments – and supported by the International Monetary Fund (IMF) and the World Bank through a structural adjustment program. The devaluation of the West African currency CFA franc by 50% in 1994 led to social unrest across West Africa, including Benin, as this measure, like many others, helped to aggravate the ordinary situation of the ordinary citizen. The dependence on neighboring countries, and the vulnerability due to limited national resources, is shown both by the rise in petroleum prices in Niger – which has led to increased inflation in Benin – and reduced electricity supplies from Ghanaduring periods of drought – which has slowed economic growth in Benin. The service sector, with a large public sector, is an important part of Benin’s economy and accounts for around half of gross national income (GNI). Public officials have taken a step towards economic liberalization policy, including in the form of a series of strikes. A major privatization program was launched towards the end of the 1990s, with limited results. Corruption is widespread, and efforts against public corruption have been a banner issue for several presidents, including the incumbent Head of State, Yayi Boni.

Benin’s economy is dependent on the agricultural sector, which accounts for approx. 35% of GNI and employ over half of the population; about. 90% of these are small users. The majority of production is for local consumption, although something is sold (smuggled) to Nigeria, and Benin is normally self-supplied with food, where meat production also plays an important role. There are extensive animal husbandry – especially in the north of the country, and most of cattle, goats, sheep and pigs, as well as poultry. – There is also some formal export from agriculture, especially of cotton and palm oil, to some extent of coffee, cocoa and peanuts (peanuts). Much of the coffee and cocoa export consists of products originating in Nigeria. For local consumption, especially yams, cassava, corn, peas, sweet potatoes are grown, beans and fruits. Cotton production has increased significantly as a result of a mid-1980s effort, and cotton accounted for nearly half of Benin’s total official export revenue in the early 2000s – while under pressure from subsidized cotton, particularly from the United States. Palm oil production has gone down significantly, and a large number of people are smuggled into Nigeria. Forestry is of modest importance, and the logging is essentially spent on fuel. About. 1 / 5 of the land area is covered with forests, mostly in the north, incl. Some remaining tropical forests which contain valuable hardwoods. 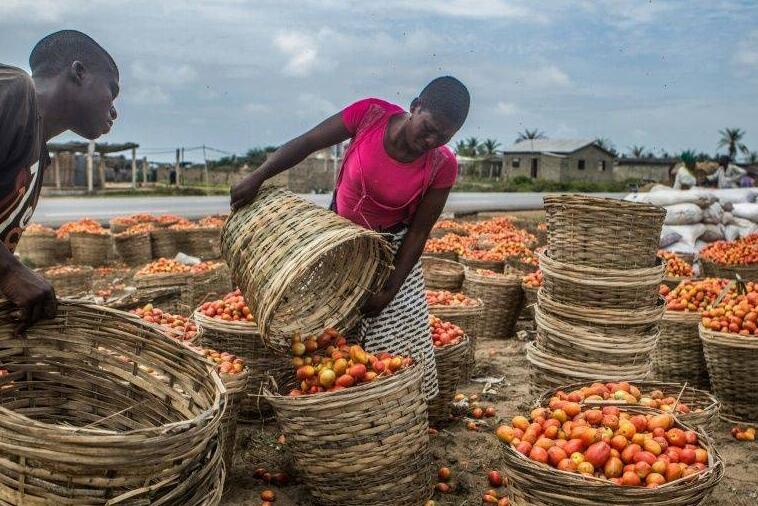 Benin has a small coastal strip, and fishing has been dominated by traditional craft fishing – which in recent years has been in decline, mainly due to. increased salt content in the lagoons. The fisheries have also been under pressure from illegal fishing by Nigerian and other seagoing vessels. About. 70% of the total catch is taken in fresh water inland. In the early 1990s, Norwegian development aid and private capital contributed to the construction of freezing stocks to improve the distribution of fish, and thus strengthen fisheries, in Benin. The Norwegian company Ticon withdrew from the enterprise, and the project was not a great success.

Benin has limited energy and mineral resources, and a small industry that mainly produces food for local consumption, as well as some processing of raw materials for export, including a considerable textile production based on the country’s own cotton crops, among other things. with a textile factory in Parakou. The country has deposits of some minerals such as phosphate, chromium, ilmenite, gold and iron ore, especially in the north, but only limestone – for use in the cement industry – and marble is exploited commercially. In 1991, the Norwegian-Swedish cement company Scancem (later Heidelberg Cement) bought the former state-owned cement factory Cimbenin, which operates a cement mill in Cotonou. Benin has smaller deposits of oil, discovered in 1968, and with extraction from 1982, with Norwegian Saga as operator in the Sémé field. Disagreement over the terms led to the agreement being terminated in 1985.

The recovery slowed down in the 1990s, and then ceased 2004/2005. Proven reserves are limited to approx. 8 million barrels, but exploration is ongoing. At most (1985) production was approx. 9000 barrels per day. The majority of Benin’s electricity is imported from the Akosombo Dam in Ghana; a supply that is vulnerable to power deficits there.

Benin has a considerable current account deficit with foreign countries, and is dependent on foreign aid, which mainly comes from the EU and France. In 2003, Benin, as one of the most indebted countries, benefited from international debt relief. Nigeria is the largest trading partner, although most of the trade is illegal, and thus not registered. Benin’s exports mainly consist of cotton and other agricultural products (palm oil, coffee, cocoa), while imports mainly consist of finished goods, as well as raw materials illegally from Nigeria. Other major trading partners are France, the UK and the US for imports; France, Brazil and Niger for export.

A railroad connects the coastal towns with Parakou in the middle of the country. The road network is relatively well developed and has a length of approx. 8500 km, with one main road along the coast, to Togo in the west and Nigeria in the east; another from the coast and north to Parakou, and on to Burkina Faso and Niger. Part of these countries’ foreign trade is done through Benin and especially for Nigerians. Cotonou has an international airport and is the country’s most important port city with a deep water port opened in 1966. This serves partly as a relief port for Nigeria, with the potential for increased volume and revenue for Benin. Some traffic inland also happens with small boats on rivers and lakes.