Economics and Business at Cape Verde


Cape Verde has limited natural resources, and a shortage of land and fresh water has hampered economic development, not least in agriculture. The archipelago lies in the extension of the Sahel belt in Africa, and is, like this, relatively often exposed to drought, which has led to a large number of Cape Verdeans having emigrated. The money they transfer to their home country is a significant source of income. The country is also receiving considerable assistance, especially from the former colonial power Portugal as well as from the EU. Since the 1990s, tourism has also been an important trade route and an important source of foreign currency. Tourism has also contributed to somewhat increased employment, but unemployment is persistently high; officially at approx. 20% (2005). Cape Verde has enjoyed steady economic growth since independence in 1975, which was particularly strong in the second half of the 1990s – with a higher national income per year. native to most African countries – and higher than the other former Portuguese colonies in Africa. However, the values ​​are unevenly distributed, and a 2005 report showed increasing poverty; over 35% of the population, especially in rural areas, lived in poverty.

Less than 10% of the land area is suitable for agriculture, and Cape Verde is dependent on importing food – and foreign food aid. The country has rich fish stocks and fisheries have considerable development potential. So has tourism, which, however, is vulnerable to international trends. The country’s geographical position has made transport an important industry; including handling of ship and air traffic in transit.

Agriculture and fisheries employ around 50% of the working population, but around 2000 accounted for just over 10% of GDP. Available area for agriculture is limited, and cultivation is further limited by the lack of fresh water. For the most part, the sector consists of small farms, and agriculture is vulnerable to drought – and prone to occasional invasions of locusts. The majority of production takes place at Santiago, which accounts for approx. half of production. The most important food crops are corn, beans and sweet potatoes; in addition, some manioc, bananas, coffee and peanuts (peanuts) are grown. The only important export commodity from agriculture is bananas. F. Cape Verde also exported small quantities of coffee, tomatoes and beans. About half of the area cultivated is used for sugar cane, for the production of alcohol for local consumption. Animal husbandry fluctuates with drought periods, with cattle, goats, sheep and especially pigs. The crops only cover about 10% of the country’s food needs, the rest must be imported.

Fishing is the part of the business sector that is considered to have the greatest development potential. The country’s economic zone is 734 365 km 2 and contains one of the world’s last underutilized areas for commercial fishing, with an estimated annual catch of approx. 35,000 tonnes. With the development of fisheries, Cape Verde can both reduce food imports and export fish products. In particular, there are significant occurrences of tuna, which also dominate the catch. Even in the early 2000s, the fisheries sector consisted essentially of small uses, and in 2001 accounted for less than 1% of GNI. The majority of the fishing quantity is taken up by boats from the EU, which have entered into license agreements with Cape Verde on fishing in the country’s waters. 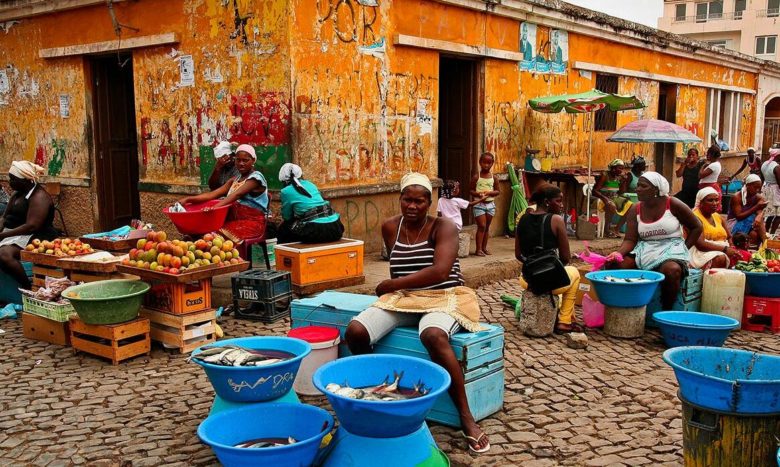 Cape Verde has few proven mineral deposits, and there was very little activity in the sector until the 2000s. Previously, pozzolana, a volcanic ash used in the cement industry, as well as sea salt, was commercially mined. In 2003, the authorities entered into an agreement with China on the construction of a cement plant, with a capacity of 350,000 tonnes / year, which will generate significant profits for exports. In 2004, the construction of another cement plant, based on pozzolana, was started, with a capacity of 40,000 tonnes per year.

Cape Verde has a little developed industry, which essentially involves processing of fish products (canned goods), as well as the manufacture of rooms and the production of footwear and textiles. In an effort to attract foreign investment in the industrial sector, a new law was passed in 1993, which provides businesses that produce for export tax exemptions and customs duties for ten years.

Cape Verde’s foremost export items are clothing and footwear, canned tuna and mackerel, frozen fish and lobster. Important bananas are exported from agriculture. Some salt, which is extracted on the island of Sal, is also exported. As a result of investments in export-oriented light industry, cement production as well as expansion in the fisheries sector, Cape World exports are expected to increase significantly. The country traditionally suffers from a chronic deficit in trade abroad, mainly due to. the big food import. The deficit is to some extent balanced with considerable foreign aid, as well as transfers from foreigners in foreign countries. The former colonial power Portugal is the most important trade link (both for import and export) as well as aid provider. In 1988, an agreement was signed with Brazil to make Cape Verde a bridgehead for Brazilian exports to Africa and Europe.

All the major islands, except Brava, have airports, and aviation plays a major role in internal transport. The International Airport (Amílcar Cabral) is located at Espargos on Sal. A new airport at Praia was commissioned in 2004/05. Main port cities are Mindelo on São Vicente and Praia on São Tiago; the container terminal in Porto Grande near Mindelo was modernized in 1997; so did the port of Praia. New port facilities were opened at Maio and Boã Vista in 1997, at Fogo in 1999 and at Brava in 2000. In 1997 an international ship register was created and Cape Verde’s flag became a so-called convenience flag.