Art and Music in Zimbabwe

Traditional homes in Zimbabwe consist of clusters of round camp houses with cone-shaped thatched roofs. Each house consists of one room, which has a specific function, such as bedroom or kitchen. The houses are often nicely decorated with simple geometric patterns, some with symbolic content.

Around 1900, bungalows were built for European colonists, and were only exceptionally adapted to the country’s building practices. Larger plantations often had larger bungalows, built in a Dutch-inspired style.

Traditional church architecture in the 1900s consists of simple rectangular buildings in local brick, often with arched or pointed windows, some also having towers. Colonial public buildings are built in different styles. The 1890s buildings were erected in painted brick, some even had thatched roofs.

In the early 1900s, the so-called railway architecture became applicable, with structures in iron, brick and glass. In the 1920s and 1930s, classicism became popular, inspired by South African examples. Eventually, functionalism made its way into high-rise buildings, often with colored exterior walls. Younger architects have experimented with local materials and shapes, one example being the ZIMCOR building in Harare (1993). 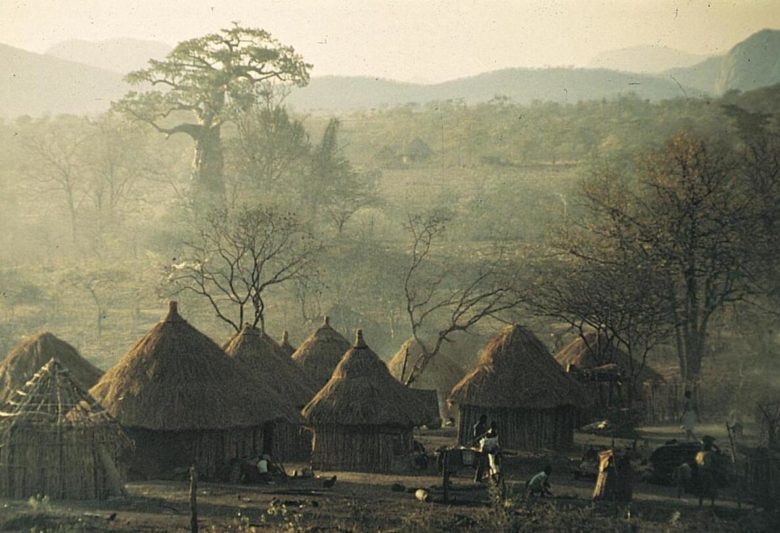 Modern painting in Zimbabwe is characterized by social involvement. George Nene’s paintings deal with current themes, and are designed in a cartoon style, with powerful, stylized characters.

Traditional sculpture consists of carvings in relief and circular sculpture. Worth mentioning are a number of stone sculptures, especially those in serpentine, inspired by the spirit world of the Shona people. The distinctive features of these sculptures consist of large heads and hands, and are made with uniform, rounded and solid shapes. A new generation of artists, experimenting with different materials, forms and methods, emerged in the 1980s and 1990s. – See also shona and ndebele.

The music scene is dominated by the Shona people, who are famous for their virtuoso treatment of mbira (thumb piano ) and their multi-voiced songs. Traditional culture lapsed during the European colonization of the 19th century. However, older forms survived in some areas and, as a result of nationalism in recent years, have undergone a renaissance.

Music and dance play an important role in the festivities of life and the year, agricultural activities and children’s play. Mbira is available in four main forms and is played in ensembles. Drum and dance ensembles are common, and the musical arc is available in three main forms. Rattles and whistles also occur.

In recent decades, an urban popular music has emerged which is largely a mixture of traditional shona music and elements of reggae and soul. Several Zimbabwean artists have made their mark internationally, including singer Thomas Mapfumo with his so-called chimurenga style and the group The Bhundu Boys with his jit music. The Mbira virtuoso and singer Stella Chiweshe has received a lot of attention from the 1990s.